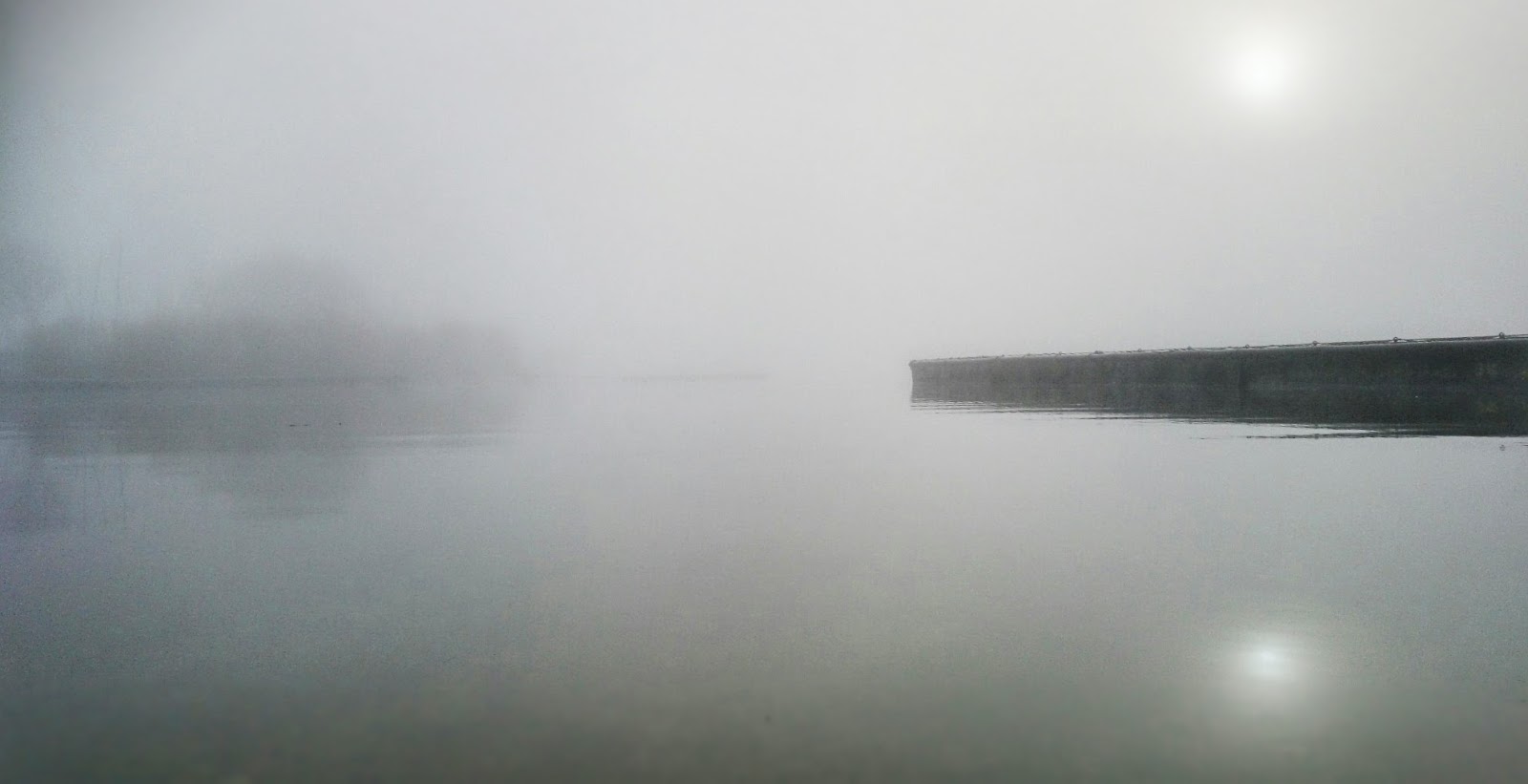 Arrived at the Club this morning to find the lake enshrouded in still, damp fog. No sign of my promised crew; as I was pulling out the boat, I received a text message from him saying sorry, that he'd missed the reminder I'd text'd him last night, and he'd subsequently forgotten and overslept.

Sam, on the other hand, wasn't given the chance. Bleary eyed, I'd dragged him mercilessly down the Club with me, and camera slung around his neck, handed him over to the safety boat crew, who generously agreed to let him tag along with them to take the photos he needed.

With the utter absence of wind, it didn't look like they were otherwise going to be very busy.

In the absence of my crew, given the ghosting conditions, I figured I'd race solo. Couldn't resist, truth be told. Not technically legal within the class rules, nobody seemed to mind too much, and I suggested to the OOD that if anybody protested, he simply disqualify me. It wasn't so much the attraction of the competition that was dragging me out, as the lure of drifting around in the fog.


It's the first time I've single-handed the Ent, which was an interesting experience in and of itself. Unlike a Wanderer or a Wayfarer, the boat is quite twitchy and tippy without the body of a crew member to counterbalance the helm. One unfortunate roll tack very nearly saw me tip the boat over top of myself, which would have been embarrassing, but, as I'm sure one or two of the spectators would have pointed out, unsurprising, given my past record.


The start-line was, unusually for Frampton and unintentionally as I think the drifting wind swung around unexpectedly on the race committee, downwind. I made a complete mess of it, tangling myself in the control lines, finding myself over the line early, and the thirty seconds it took me to get back behind the line and restart, saw me starting a mere breath away from the Lasers.

A Laser has the performance of a breeze-block in weather like this though, so had left them behind by the time we'd reached the first mark. Not long after that, I caught up with the gaggle of Solos and Moths ahead. The light air didn't give many options so it took a while to eventually sneak past them.

Finding the marks in the fog was tricky. The racing marks at Frampton are colour coded to their position in the lake, so you know Red will always be in the far quarter off the beach, White is over by the house, Green is by the big tree, or if the OOD is feeling particularly malicious, further down beyond the elbow in the lake, and Yellow is back over by the Clubhouse.

It's surprisingly difficult to find them when visibility is down to about thirty feet.


Once I broke free of the main gaggle of boats, this turned to my advantage. With only Pete in the Comet and Chris in his Moth left ahead to catch, Pete rounded White some way ahead of me, but lost his bearings and headed off in the direction of Red. By the time he'd realised his mistake, I'd caught him at Green-Yellow, stuck on top of him around Red and then Yellow, and then eventually left him behind on the beat back up to Green (the wind had swung back around by then to make it windward once more), to finish 2nd overall.

Not a bad result to finish a day when I hadn't originally intended to sail. I hope Sam got what he needed. The boy was beginning to look chilled, so I skipped the second race, put the boat away and took him home, stopping on the way for a late lunch at McDonalds. By way of disclaimer: aside from the one at the top, taken from my phone, these photos are Sam's, but I've tweaked the contrast on them, cropped one or two, and cloned out some dirt spots on the lens that became apparent with the increase in the contrast (suspect it was condensation from the fog). I've left Sam with the (unprocessed) originals to take to school and do with what he will.

[edited: had to rethink the title of the post as I've already used "Ghosting" not long previously, which I guess sums up the trend of the year's weather. But in any case, recycling is one thing, but such lazy unoriginality quite another!]
Posted by tatali0n