I had to miss the Laying-up Supper and prize giving at Frampton this weekend as we had a gig down in Bristol. Got to the Club Sunday morning for the usual racing, and various friends cryptically mentioned "Heard you won a trophy" and "Congratulations on the prize" and that sort of thing. 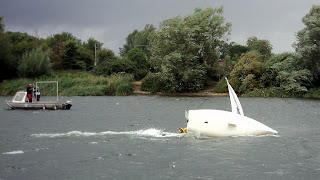 It was the prize-giving evening, and I've had a good first year with the Laser, winning the Personal Handicap and the Summer Class series, so it wasn't a great surprise, and I was at first a bit baffled at their apparent amusement. 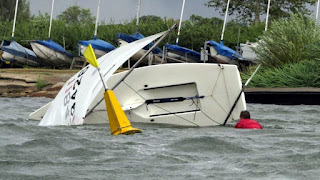 Especially when the people offering the congratulations suddenly turned coy when I asked them which trophy they meant. 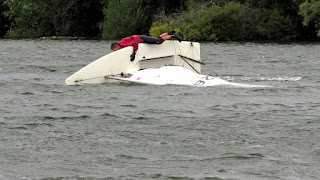 Turns out it's my old friend the Capsize Trophy. Which makes it the third time the thing has come home with me. I thought there was some sort of unwritten rule about winning it more than once, but apparently not. 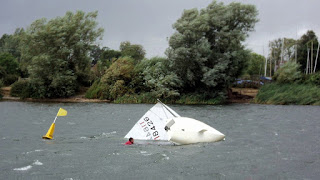 And, apparently, the prize giving committee were quite unanimous in their choice this year. Amongst apparently may obviously qualifying achievements of the candidate concerned, there was some mention of something about a certain person being idiot enough to try racing a Laser Standard rig in 50mph winds. 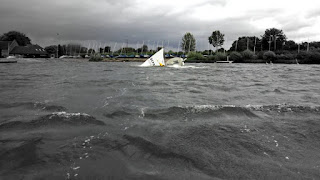 That's not how the person relating the decision to me was kind enough to phrase it. Neither did they suggest that the clear lack of any apparent instincts of self-preservation were in any way some kind of character flaw; but I do rather suspect that was what was going through their minds.
Posted by tatali0n