In precis of the weekend

This is as political as I will get on this site; the world is a broad church and whilst I feel very invested in the result of the upcoming general election on 12th December, politics seems to suffice every other aspect and avenue of our lives at the moment.

I know I have friends of many and diverse political opinions, some right to my way of thinking and some really quite wrong. But we'll still be friends long after the 12th is over, and would save my arguments with them for more appropriate forums.

This is not a political blog (not that I'm sure it has any coherent, consistent theme at all) and I've no wish to alienate anybody here.

But I did really like the above photo, and it was what I was doing with my Saturday afternoon.

The lady centre frame is Ash Sarkar, one of a few guest speakers at our local parliamentary candidate's campaign launch. Another of the guest speakers is sat in a blue shirt frame right, a couple of rows in front of me, next to our candidate herself. 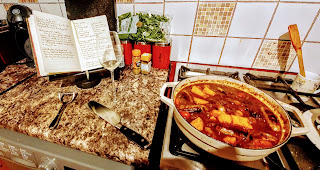 After the campaign rally I went home and cooked supper for Nikki and Sam.

I am fond of cooking with wine, although hard won, occasionally painful and sometimes quite bloody experience has taught me to try and make it a rule not to open the bottle until I've finished all the cutting and chopping.

Of course, rules were made to be broken. And I still have all my fingers intact, so no harm, no foul.

Sunday was my turn at Frampton as race officer.

It was the last set of the nine Club Championship races at Frampton. A lovely day to be sat on the committee boat, even if the conditions did make it a little challenging to set an appropriate course over the three races of the day.

The weather did pick up as the day progressed however.

The Championship at Frampton is now over. The reigning champion Pete Dalton convincingly held on to his title. Mike Crowley squeezed in clear by one point into 2nd place, and Rob Cyphus took 3rd. Despite a strong start at the beginning of the year, I failed to keep it consistent, and so Rob beat me quite convincingly into 4th place by two points.

I'm especially pleased that Mike beat me. I've frustrated him quite enough in various other matches over the last season. I find it's good to keep him on his toes, I think he enjoys it really.

So I'm not discontent. Despite the ups and downs and nagging, persistent injury to my shoulder and arm, racing the Laser this year has been really very good fun. 4th place in the Club Championship is, I think, my best result yet, and I've picked up the odd good result or two in the various other of the club series to earn a respectable piece of glassware again for myself once this season is finally over.

And hopefully, I can give that damned Capsize Trophy back!

tatali0n
Plays in a band, sails dinghies, practices karate, addicted to computer games and tests software to pay the mortgage.