The weekend just gone was gig free. Which has become something of a rarity, as the band's having a busy year. Had hopes of taking Calstar over to Watchet with Dad, but the forecast was marginal. By Friday evening it was still suggesting we'd be looking at a F5 gusting 6 with 2m waves on Saturday. Not the sort of conditions we really relished hanging around at anchor in off the Somerset coast, waiting for the tide to fill in enough to open Watchet's gate for us.

We reluctantly scratched the idea. Dad said had plenty of other stuff to entertain himself with for the day; perhaps if the weather slackened off enough Sunday we'd take a day trip around the Holms.

So I found myself at a bit of an unexpected loose end Saturday morning. An hour of karate shook the last of the sleep out of the system, then I figured I'd spend the afternoon cutting the grass and clearing up the back garden. I got part way through the clearing, dismantled an old kennel the dogs never use and was just taking up space. Debating whether to take it down the tip fir or get lawn mower out, I had half an ear on the wind whipping around the eaves of the house and bending the clumps of bamboo over down by the shed, half an eye on the clouds scudding across the sky like manic racehorses, reflecting that we'd been right to not try Watchet, this wasn't a day to be exposed out in the Bristol Channel.

Lamenting the fact that these days I only have a double-hander berthed by the lake in Frampton, would've been a lovely day to just drop everything and go bashing around the lake just for the sake of it. Thinking I really should get on with the mowing, the air tasted like the promise of rain later. Thinking the wind's definitely up. 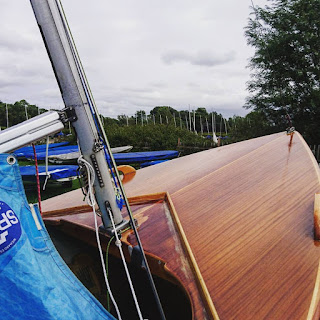 Decided to hell with it.

Grabbed my sailing kit and headed down the lake. You can single-hand an Enterprise if you have to. Called in at the Shop on the way down to see Nik at work, promised I'd be home by 1700 and would cut the grass later. She rolled her eyes a little but didn't tell me no.

Got to the lake, stripped the cover off Buffy, dragged her over to the water's edge and started rigging her. It was a busy day at the Club, first day of the Junior Sail Training, and the instructors definitely had their hands full with the kids and the conditions.

And they I got press-ganged by the Level 2's.

Can't say I put up too much of a struggle. So I left Buffy on shore, which was probably a good thing given the lack of crew and the fact the blustery, squally conditions were only building as the day wore on, and spent Saturday afternoon blasting up and down the lake with a couple kids in one of the Club's training boats. Even double-reefed, with enough wind a Gull will plane easily with just myself and a couple of juniors aboard. Seeing their faces split wide with mad grins that only echoed my own adrenaline rush as the gusts hit and the boat they were helming climbed up onto her own bow wave and we went screeching across the lake was a rare treat, and everything I love about teaching people to sail.

The first day of a six day course, the one lad had done the course before so whilst sailing wasn't entirely new, I suspect the experience of handling a planing sail boat almost certainly was. The young lady aboard with us was completely new to it, and she'd caught the absolute perfect day for her introduction to sailing. I don't imagine their grins faded until long after I'd set them ashore again. I know mine didn't.

We came ashore and packed up around 1630. Then Charles, one of the other instructors on the course and a fellow Enterprise sailor "persuaded" me to go out for a bash around the lake with Buffy before I packed her away. Obviously the persuasion involved an awful lot of pleading and arm twisting.

As well as being horrifically persuasive, Charles is a very experienced sailor; he's one of the long time club members who helped teach me to sail when I first joined Frampton some eleven odd years ago. But he's a relatively recent convert to racing. I crewed for him aboard his Enterprise "Boldly Go" a month or two back and whilst she's a lovely boat, I don't think it would be unfair to suggest she's configured more for cruising that charging around the cans. I would never suggest another man's love was a bit on the heavy side, but even Charles would have to admit Boldly sit a half inch or two lower in the water than my Buffy. Something to do with all the buckets he packs aboard, along with the kitchen sink and, I suspect, a kedge anchor stowed somewhere under the foredeck.

We were only out for about 40 minutes or so, but it was a scream. The gusts were brutal, but with no course to keep other than convenience we simply tore from one end of the lake to another on a broad reach whenever the heavy stuff hit, picking up Buffy and sending her hurtling across the lake in a massive ball of spray and foam and adrenaline. After seeing what a down to fighting weight Enterprise can actually do, it wouldn't surprise me if Boldly looses a bucket or two from her inventory by the next time I have the pleasure of crewing for Charles.

I got home a little after 1800, bruised and tired but sated.

The grass never did get cut.

I don't know how she puts up with me.
Posted by tatali0n