For the anatomy of a great weekend, add in to the following a sprinkle of wind and a great big dollop of sun and blue sky: 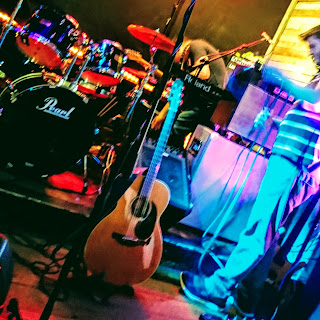 Friday night's gig always showed every potential of being a little bit lively, and didn't disappoint. The venue was a canal side pub exactly seven minutes down the road from Dad's house called The Pilot. The really nice thing about the place is that we don't very often get to play so close to home. Aside from the obvious advantage that this means we don't have to drive an hour back up the motorway to get home afterwards, it also means that a lot of friends and family inevitably turn up to support us. 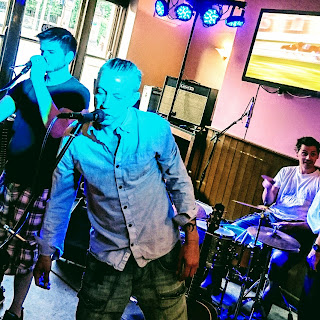 A particular treat: a couple of friends that turned up in the crowd hadn't seen us since we regularly used to play at various old venues around Gloucester, which has to be ..... oh, some twenty years ago now. It was very nice to see them again after all this time. Let's hope neither of them decide to leave it another twenty years.

A note of caution. The following video clip (if I've managed to get the embedding right to link it here) was taken from the stage part way through the second set. It's raw and loud and does no credit to the actual sound of the band; but it does capture the energy and mood of the night. I'd therefore turn your volume down a considerable way if you decide to play it!


Saturday was spent on the lake at Frampton, teaching juniors to sail. Considerably lighter conditions than the previous week, the sun shone relentlessly through the day. I'm always amazed by how quick kids pick things up, although the day did offer perfect conditions. By the afternoon, we had most of the instructors out of the boats and the kids managing on their own. They've another three or four Saturdays of training still to come yet; they're going to do fine. 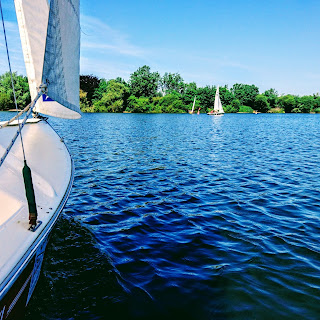 Got home Saturday afternoon hot and tired but in good time to rest up for an hour before heading out to that night's gig. Except as I pulled up on to my drive, I realised I'd left my buoyancy aid on the lake shore with my mobile phone still in the breast pocket of the thing, so had no other choice but to head back the Club to fetch it. Fortunately, it was still exactly where I left it so all ended well, except I was then short of time to get home again then back out for the evening's gig down in Bristol. 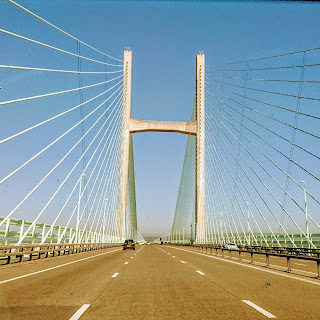 Waking up Sunday morning was as gruelling as I'd expected it to be after getting home in the early hours the night before. The alarm went off at 0600. I ignored it. And ignored it. Until the phone rang at 0730 and my daughter Tasha asked if I'd left yet, slightly panicked as she'd apparently overslept herself. 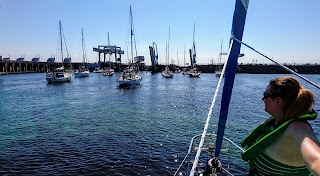 I was half an hour late picking Tash up from her place, so we didn't get back across town to meet Dad at his until gone 0830. We then set off in his car for Cardiff. Tash was an unusual and very welcome addition to our usual crew of two. She'd been given the Sunday off work for a change so had called me earlier in the week to ask if she could come sailing with us. The chance so rarely arises as her work so often gets in the way, so I don't get to see so much of her these days, since she moved out to live with her boyfriend. 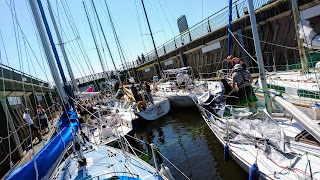 The forecast had been for bright sun and no wind, and looked to be coming true on the drive over; it was 22C already when we finally got to the boat, around 1000. A neap tide with high water expected just before 1400 and flat calm, we weren't expecting to sail but thought it would be nice to spend the day on the water anyway. There is something refreshingly unchallenging about the Bristol Channel at times like these. I'd been originally torn between heading up-channel to explore the Usk and Newport or heading across channel to nose into Weston-Super-Mare. Both were about 8nm away and both are places we've previously only sailed past at a distance. Whenever you're abroad on the Bristol Channel you always seem to be going somewhere, racing time to get there before the tide turns, you so rarely just potter and explore.

In the end we settled for Weston. It's somewhere we'd all visited by land any number of times before we got the boat, and there was a drying harbour on the north side of the town, a possible future spot to anchor for a night, and the flat calm of the day seemed the perfect opportunity to go and take a look at it.

Leaving Penarth, we found a huge scrum of yacht traffic all queuing up for the 1100 lock out trhough the Barrage. The congestion had been amplified by a hydraulic failure on one of the bridges guarding the three lock entrances, leaving only two locks available for anything with a mast. We squeezed into the second of the working locks with eight other yachts, rafting up in three rows of three abreast. A tight squeeze, but everybody was good humoured and supportive of each other so it all worked like a well oiled machine.

Once out into the Roads, to our surprise we found enough of a breeze to haul the sails up to catch, so the engine was hushed and for the first half hour we trickled happily along in the direction of Weston beneath the warm sun. It didn't last though. As the wind failed, I considered just ghosting along for the pleasure of it and giving up on our intended destination, but eventually caved in, fired the engine back up and started to motorsail.

We closed with the eastern shore off Sandy Bay, turning down-channel against the last of the flood tide to approach Weston Bay passing the derelict ruins of Birnbeck Island to port. Fascinating to get up close to somewhere we'd only ever seen previously from a distance when sailing down to Sand Point on a spring tide from Portishead. This alone probably would've made the trip worthwhile. The sandy foreshore of Weston Beach was thronged with beach-goers, soaking up the sun, the noise of their revels and entertainments rising from the shore like a great fug. With just the mainsail up we continued to motorsail around Knightstone and towards the Weston Pier, pointing out to Dad where the harbour was, but thinking we'd stand off rather than edge in as originally intended.

The shore and pier were heaving with sun-warmed, oiled bodies, but the bay was quiet with only ourselves, another yacht (also motorsailing back and forth under main alone), a couple of RIBS and a couple of motor cruisers. There didn't seem to be much risk of running over an occasional, unseen swimmer, but I didn't see the point in risking it.

And then we ducked reflexively as a phalanx of nine distinctive red Hawk T1 jets screamed out and over us from the shore, streams of white demonstration smoke trailing them as they pulled up into a graceful loop over the water. 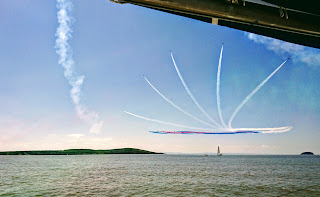 It turns out this weekend was, unbeknown to me until that moment, the weekend of the Weston Air Festival, and we'd arrived on the tide just in time to be greeted by the Red Arrows on arrival. 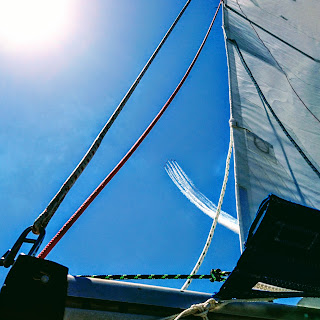 So we were treated to ringside seats as my favourite aerobatics team did what they do best beneath the unimpeachable blue of a gorgeous summer sky on what, it later transpired, was the warmest day of the year so far, the temperature clocking at least 30C, possibly more. I've been to any number of airshows, and seen the Red Arrows perform any number of times, but I've never had such a unique, close up viewing position as we did on Sunday; out and away from the madding crowd, afloat upon the waters of Weston Bay, sat just beneath the scream of the jets themselves.

The Red Arrows done, we set our course back towards Cardiff; a couple of hours crossing the tide, engine gently thumping, mainsail drawing as much on our own apparent wind as any true breeze. The sluggish neap tide and almost near lack of wind made for a unusual lack of disturbance in the Channel waters. Instead of their usual silty brown, they'd turned a distinct muddy hue of turquoise. Blue seas these are not and will never be, but I think that's as close as we'll ever get to it around here.

This is an interesting story. I sometimes wish my life was a bit more exciting like this. I also live in my Yacht, but I don't play in a band. Instead, I work from my Yacht on people's websites. I, like you, enjoy the nomadic lifestyle, but instead of loud music and bars, I usually end up in quiet coffee shops.

Thanks Steve. Have to admit, there are times when I feel I could happily trade the excitement of gigs and bars, late nights and early tides for the comparative peace and tranquillity of simply living on a yacht and designing websites ;) There's a lot to be said for a quiet cup of coffee, and, perhaps a little ironically, I'm really not a fan of crowds and loud bars unless I've got a guitar, mic and PA to hide behind!