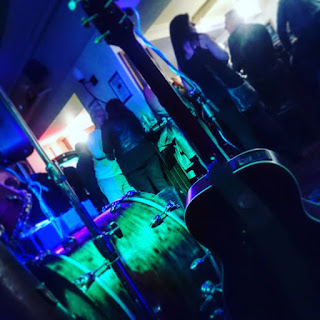 Saturday's gig meant that I had to stick around this weekend, so any time aboard Calstar was going to be Sunday and staying local. Nice think about Cardiff is that the shelter of Penarth Roads means that's entirely possible.

The day started bright, then clouded over as we set out a little before 1100. The Barrage lock was crowded but once we were out of the harbour and through the wrack channel the crowd quickly dispersed. 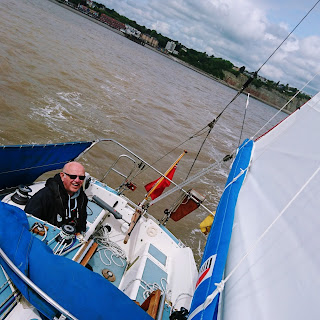 Penarth Yacht Club were launching their Enterprise fleet from their foreshore as we passed. I think I've mentioned before that the only time I've raced my Ent with them, Hels and I broke her mast in a capsize. I remember how massive and intimidating this area felt back then. It feels much smaller these days, but miles traveled and familiarity will do that to a place.

There is still a tickle of that old intimidation remaining though.

I'd like to race again at PYC with Buffy some day. I know the boat and the area so much better now. Not sure it'll ever happen though, so many other distractions. Our poor humble Enterprise has very much been relegated to Wednesday evening dashes around the cans on the lake at Frampton these days.

With the sails up and a course set close hauled against the tide, we beat along the Penarth shore out towards Lavernock Point. The southerly wind seemed to average the top end of a Force 3 for the most part, so although we started with the first reef still in the main from the previous weekend, we quickly shook it out. 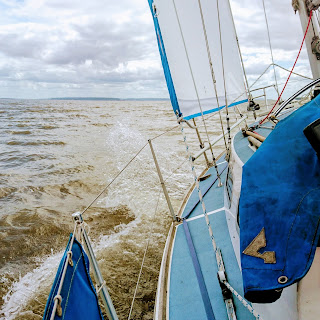 We cut just shy of 4 knots through the water, and in close to the shore a back eddy let us make good way against the set of the tide. Further out however, the foul tide reduced our speed to less than 2. As it was closer to neaps that springs it was only a small tide, otherwise I doubt we'd have even made that.

At 1120 our VHF picked up a distress call from a power boat out towards Flat Holm. We listened in as the Coast Guard managed it, and laid our course in the direction of the call out towards the island although the DSC details on the VHF showed the caller as being 4.4nm away and up tide; out of our reach.

They were reporting engine failure and were concerned the tide was going to set them onto the rocks of the Holm. The skipper seemed fairly sure his anchor was holding, but wasn't completely certain. Eventually,  at 1234, he got the engine running again and the Mayday was cancelled, the skipper advising the Coast Guard of his intention to return to Cardiff. We held our course out towards the island until they eventually passed a mile or two astern of us on their way back, clearly fine. We tacked and laid course for a final beat back to Lavernock Point, where we gybed near the spit and ran back towards Cardiff, foresail and main goose-winged.

The Penarth fleet were just finishing their race as we passed by them once again, furling our own sails and starting the engine in preparation for returning to the Barrage. By now the sun was warm and the sky was blue. A lovely day to be out on the water.

The bay does offer a level of access and flexibility to our sailing that we just couldn't get at the more tidally restricted Portishead. What we really need now is a long weekend free of gigs so we can take advantage of the fact it's also a day's sailing closer to blue water and get ourselves down channel.

Not next weekend however. Next weekend I am without boat. I've promised to take Nikki for a weekend away to Cornwall. There are, of course, boats already there.