I think the "luff length crisis" with our new foresail is solved.

The original fittings that came with the Furlex involved a pair of great big snap shackles; one on the swivel at the top and the other on the drum at the bottom. I say "great big" but by that I really mean about 4 four inches each in length. Everything is relative. 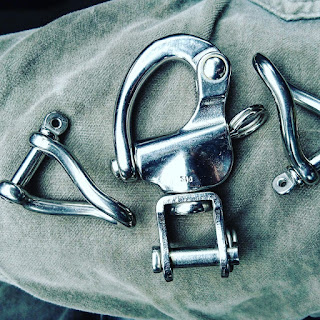 So last Saturday we nipped down to the boat for the morning, unbent the foresail, removed the top and bottom snap shackles and dropped in at the chandlery on the way home to buy a couple of lighter, 6mm twisted "dee" shackles, each being only a couple of inches in overall length.

So a saving of about four inches. If I was right, and the luff length was only in excess by an inch or two, the hope was that would fix it.

Getting the sail off to remove the snap shackles wasn't so straight forward. The wind was blowing in excess of 20 knots straight down the marina and straight in over the stern of the boat, initially moored bow-to in her berth. So the first job was to turn her around and put her back in stern first so we could unfurl the sail without mishap. 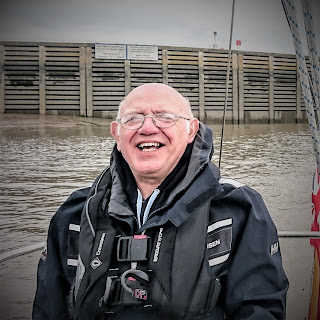 This picked up an interesting miscommunication between Dad and myself.

Our usual process when casting off is he takes the helm and I walk her back out the berth until the speed astern picks up enough for the rudder to overcome the prop wash, at which point I step aboard, and generally keep an eye on the receding pontoon until we're sufficiently clear for Dad to turn without the bow swinging into the jetty. His visibility down in the cockpit isn't that great and he's understandably not one for balancing on the coamings whilst juggling the throttle with his foot.

At least that's what I thought we were doing. Things got a little bit interesting the week before in lighter wind from the same direction, which I'd put down to Dad simply not swinging the stern around enough before engaging ahead. This time however, when I called out that it was clear to swing, he went immediately ahead, still more or less facing the berth, and tried to turn up into the wind. Which proved an eye opening repeat of the week before, except with significantly more wind against the beam to push us down onto the various bow anchors and out-drives of the other boats moored along our pontoon.

It all ended well enough with a little bit of anxious sweat and some colourful language but no tears, and whilst I did at one point step over the pulpit in preparation to fend off with my foot, I didn't actually have too, and we eventually ended up back in our berth after a couple of failed attempts stern-to, as required. All the enthusiastic application of throttle roused our lovely neighbour Lucy up from below decks aboard her gorgeous yacht "Dakota" and she kindly helped out by taking the stern line from me as we came back alongside. 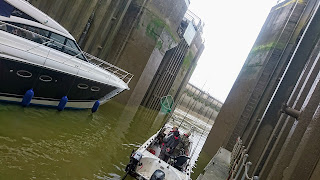 We fitted the new shackles, hauled up the sail to check it looked okay before dropping it again to secure the shackle pins with some seizing wire, and then cast off and headed out to the bay. 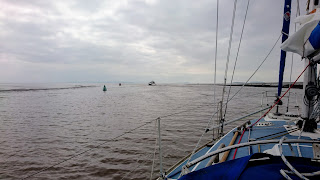 It was about half an hour before low tide by time we locked out through the Barrage, making for a very long drop and us having to carefully pick our way from the outer harbour and into the Wrack Channel between port and starboard lateral buoys, the nearest of which were now sat high on the mud-banks they were intended to mark. The sky was grey and the sea flat. As we left the navigation channel and motored out towards Raine Point, what little wind there was failed completely, the surrounding waters smooth as smoked glass. 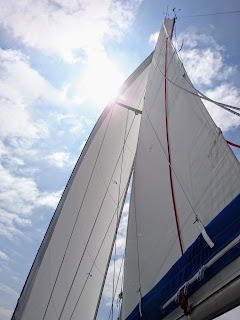 After half an hour of motoring along the Penarth shore, the tide close to turning, we unfurled the genoa and hauled up the main. The sky was beginning to clear, with broken sun now edging through, and a gentle, southerly wind began to stir, albeit hardly enough air to even ripple the water. Nonetheless, it was enough to give us steerage and trickle along close hauled on a starboard tack in the direction of Flat Holm. 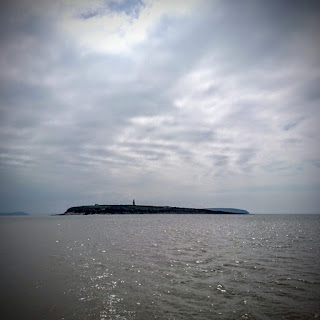 The set of foresail seemed fine; I put enough tension into the halyard to put a vertical crease up the luff, and then eased it back until the luff was free of creases in either direction. As is the way with these things however, you fix one thing and another fails; as I pulled on the outhaul, the sheathing around the nylon core of the line frayed and then parted entirely, apparently abraded away by the cleat. Not exactly a disaster, and the core of the rope held in the cleat so we were able to continue sailing with it as it was, but annoying as we'd only replaced that line at the end of last summer.

As the tide began to flood, the sky cleared to a gorgeous, summery blue, and the wind kicked in. Very soon the little boat was heeled over with a bone between her teeth and charging along. Later checking the records of a local(ish) weather station, I read that the lunch time wind was gusting up to about 18 knots, which made for some fantastic sailing; more so in that the sea remained pretty much flat through out, the wind blowing up with the flood tide.

We covered around 10nm in the couple of hours we were out bashing back and forth across the bay under sail. 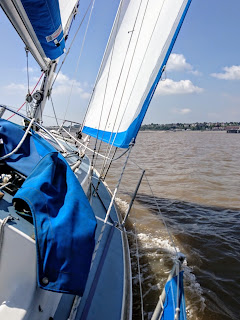 It was a lovely day's sailing. I think we've sorted the set of the new sails now, which is a tremendous weight off my mind. The damaged outhaul is an easy fix as we were able to thread it out attached to a mousing line ready to run the replacement line back through when we return to the boat this coming weekend.

Which, hopefully, will be a proper test of the new sails.

Wind is forecast F4 gusting 5 from the south and then veering west for the weekend and the tides are just right for what we have in mind. I have a gig Friday but am clear Saturday and Sunday, so assuming the forecast doesn't deteriorate any further, we're planing to sail over to Watchet and back.
Posted by tatali0n