Just spotted this post in my drafts. I think that means I was going to post some words around all the pretty pictures.

However, the moment has passed I think. These were taken a couple of weeks ago, our first trip out through the Barrage with our new sails, albeit with the luff of the genoa still hopelessly, horribly slack.

But it seems a shame not to post the photos; we'll have to content ourselves with just a few words to wrap around them for context. 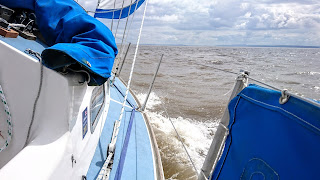 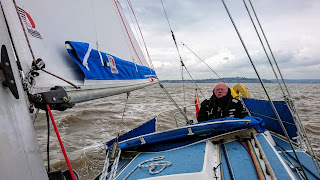 It was a gorgeous day. Made all the sweeter by the fact that it was a Monday; a national bank holiday weekend, so a liberated Monday free of my usual station sat at my desk in the office. I won't say "chained" because I am routinely there entirely of my free will. But it was nice to be somewhere else for a change.

We locked out around local high water and spent a couple of hours sailing carefree circuits up to the Cardiff North buoy, back down towards Mid Cardiff, cutting back in towards the Outer Wrack then up and around again. 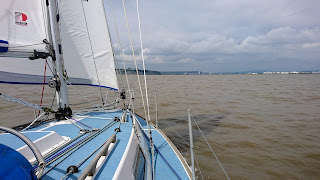 The creases in the luff and bellowing at the tack of the sail were distressing, although the winds were relatively slight and the little boat charged around as if a thing invigorated with the reclaimed joys of youth.

But it definitely set our minds that we'd have to do something about the set of the sail ourselves. It was about now that we settled to try and resolve it with shackled. We'd asked a local rigger to come look at it, but as is so often the way with these things, he was all enthusiasm when initially approached, but two weeks later hadn't found the time to amble down the pontoon to take a look and advise. 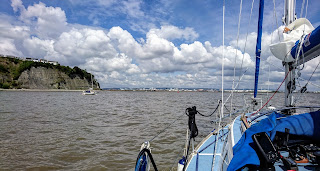 The lovely spring weather lasted throughout our entire time out on the water. Just shy of a couple of hours under sail, and 11.5nm covered going around and around in circles just for the sake of it.

We eventually locked back in, and headed over to Mermaid Quay where we moored alongside for an hour and went in search of lunch, settling on tapas at one of the many local restaurants.

The sun continued to shine as we made our way back to the marina, moored up in our berth and tidied everything away to head home. As we left the boat and climbed into the car, the western sky was beginning to darken ominously.

Twenty minutes later, on the motorway passing Newport, the heavens opened and the deluge came down. 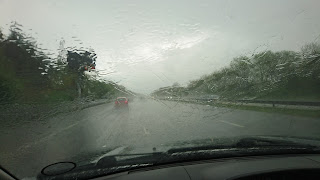 I'm dismayed at my attempt at brevity. I did honestly mean just a few words. Seems I just can't stop myself. I think it's the click-clickety-click of the keyboard as I type.

"We'd asked a local rigger to come look at it, but as is so often the way with these things, he was all enthusiasm when initially approached, but two weeks later hadn't found the time to amble down the pontoon to take a look and advise."

Heh heh heh. I'm still waiting for a rig check ordered in November. Bit difficult now with the boat in Milford. Assuming it is the same rigger (which I am sure it is) it is worth perservering though, because they are honestly top notch. But the marine industry has its own peculiar ways.....

Hah. Yeah, almost certainly is the same guy. Intentionally didn't name him because I've heard nothing but good things and he came highly recommended; as you say, it's just the marine industry and it's peculiar ways.

The main reason for wanting to solve the problem by lengthening the rig rather than shortening the sail was a reluctance to send the sail back to be recut after only just, finally, taking delivery of it. Jeckells, who have been nothing but massively friendly and helpful throughout as long as I did the chasing, had said it was only a fifteen minute job they could turn around in a week, but then they say that ....

But we're sorted. As it seems is Karisma now? I hope she's happy in her new Milford berth and you and your family have a whale of a time exploring the waters surrounding her new home this summer :)