Saturday night. From this: 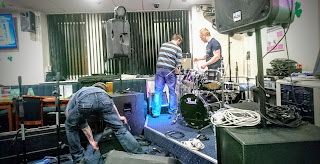 It was a great gig. The Kingswood Club is always a lovely crowd, already looking forward to going back there again.

And really nice to have our own drummer back. Bean's last gig with us was back on the 14th January. We've had four other gigs since then. He hasn't. His wife was expecting their second baby so we'd already planned for him to take most of February off and organised deps accordingly.

However, complications moved matters forward and little Ernie arrived unexpectedly early but otherwise sound and well and, of course, very welcome a couple of days after Bean's last gig in January, so we arranged some hasty cover for him for the rest of that month, but with February's cover already arranged he still had to sit out February anyway whilst friends of the band kept his drummer's seat warm.

You can't promise a guy a gig then take it away again just because the baby arrives early. Especially not when you might well need to beg the same guy to cover another gig for you some time in the future.

Both Cal, Dan and Al who variously covered for Bean during his "paternity leave" are fantastic musicians and good friends and it was great having the chance to play with them all again.

But it was still very nice to have Bean back with us again Saturday night.
Posted by tatali0n