Buffy: Fruits of our labours

Woke up this morning to the sound of the wind rattling the windows in their frames and the sight of the tree outside my bedroom window dancing like a dervish.

The first day of the new sailing season at Frampton, the first race wasn't until 1400 so I had time to enjoy a slow, lazy rise out of bed, or would have done had it not been for my building sense of anxiety. Since first starting to watch the forecast at the beginning of the week, I'd been hoping and hoping the initially promised damp, flat drift would morph into something much more worthwhile. 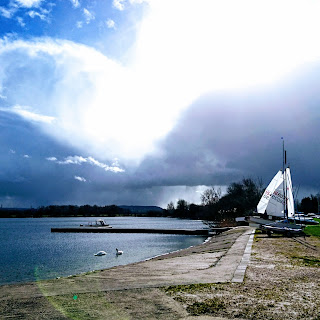 It looked like my wishes had been answered, and then some. I watched the tree twist and turn outside in the gusty air with a fair degree of trepidation. But there wasn't much else to do but to get up, get my kit together, rouse Ben from the pit he calls his bedroom and head down the Club to face it. 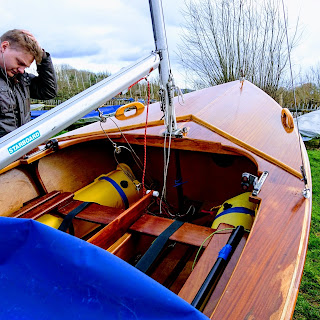 By lunch time, it had moderated a little, but not a lot. As we prepared the boats, we could watch lines of squally weather bringing wind and rain blowing up the Severn Valley to embrace us. In one such gust, the leeward trolley wheel of the Laser standing next to our Enterprise on the lakeside exploded with a loud bang under the pressure of the wind, hard plastic fragments ricocheting off my freshly painted hull to bounce into the water.

It gave us all quite the start, none of us had ever seen the like.

But the squalls, though frequent, were relatively short lived. 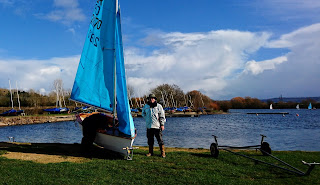 Our maiden race of the season was a pursuit; each boat starts on a time based on their respective handicap, the slower boats starting first, the faster boats later. Whoever has the lead when the clock runs down after about an hour wins.

The foul weather had kept most of the fleet at home, so only seven boats made the start line: a couple of Solos, a couple of Laser Radials, a Topper, another Enterprise, and us.

With the Lasers reefed down to their Radial rigs, that left we Enterprises the fastest boats in the fleet, so we started last, the hounds to everybody else's foxes. 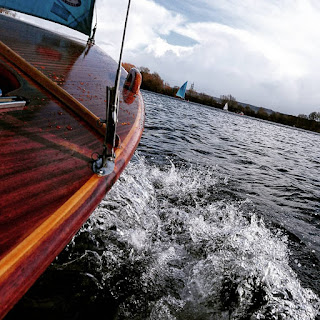 A port biased line, Ben characteristically opted for a port start, but uncharacteristically made a hash of his timings, leaving us about ten seconds behind the line when our gun went. We were only saved from being punished for our error by our sister Enterprise "Ghost" being equally late on her more conventional starboard start, and so they crossed a couple of boat lengths behind us and were left chasing.

It was lively from the beginning, with the gusts coming through hard and and frequent.

We kept our lead on Ghost, although she remained tenaciously close behind, and caught the two Solos early. We closed down the hindmost of the two lasers Lasers, crossing him as we were beating up to the windward mark,  Ghost still hot on our heels. And then, just as we were rounding the mark, another gust came slamming through.

Ben dumped mainsail like it was going out of fashion as he and I both hiked hard to windward, but by the time I realised it was no good and tried to free the jib, the angle on the cleat was too acute, I was crammed up by the shroud and I couldn't yank it loose. The mast touched, the mainsail slapping onto the surface of the water. Ben slid down the hull like a kid on an amusement park waterslide to disappear astern, and I vaulted backwards over the gunwale to land on the now horizontal centreboard. 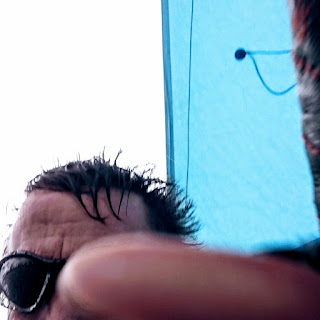 The trouble with an Enterprise when racing in a handicap fleet is that most of the single-handers we're against can tip over and bounce back up in moments, their hulls completely dry and ready to go again. We capsize, and when we come up we're barely held afloat by our buoyancy bags, the hull swamped and the gunwales awash.

Buffy came back up as I leaned back and pulled on the jib sheet, scooping Ben with her, still in the grip of the gust, pointing conveniently downwind towards the next mark. I rolled in as she righted, pulled the jib on and slammed the bailers open in the floor of the hull whilst Ben struggled with the tangle of mainsheet astern. She began to move. 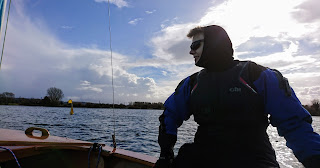 There is a good place and a bad place to capsize an Ent. At the top of the beat, with a long, fast reach ahead of you to the next mark, is as good as it gets.

"Does she gybe better or tack better when she's full of water, I can't remember?" yelled a vaguely concerned Ben as we neared the gybe mark, Buffy wallowing like a drunken whale ploughing through the water, throwing spray everywhere.

"Neither. Just go for it!" I yelled back, and started to haul on the kicker to coax the boom across as Ben turned the mark. The boom went over. We stayed up. And accelerated out of the gybe, still in the grip and violence of the gust, the boat rising out of the water like the Nautilus and beginning to plane as the lake sheeted out through the bailers and transom flaps, back to where it belonged. 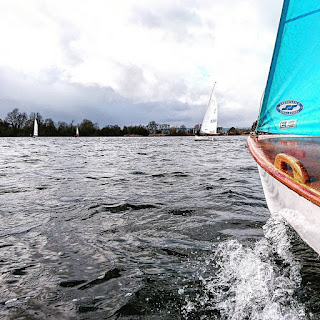 By the time we reached the next gybe mark at the other end of the lake, Buffy was dry once more, and the second Laser was now also history in our wake.

It was a fantastic race. The weather was hard and unforgiving, but exactly what we needed to blow the cobwebs out. We caught the leading Topper in the final few minutes of the pursuit, and so Dad, who had put so many hours of hard work into the boat with me over the last six weeks, got to watch us win the first race of the year from the Club's veranda. 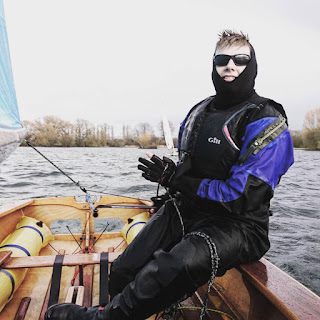 I couldn't tell him if his repairs to the centreboard had stopped the leak, there was too much water coming in over the sides to say. But I don't think it really mattered today; the freshly sanded and painted hull and the rebuilt and refinished foils slipped through the water like a dream and gave us our win.