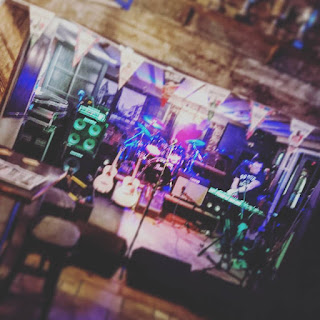 It has been a stressful week.

I've had a bit of a bug since a week ago last Tuesday. Let's call it a cold. "Man flu" would be too strong a term. Nothing too debilitating at first, a bit of congestion, a bit feverish on occasion, and a rumbling, chesty cough. Nothing I couldn't sail through, or play through, or work through, but it had me worried about last Saturday. Congestion, fever, even a sore throat are generally no problem, but a cough, especially one that starts in or goes to the chest, has the potential to turn your voice into a train wreck.

A bit of a problem when you're the band's lead vocal. Especially when you generally gig every weekend, not much recovery time there. It's one of the reasons, albeit far from the only one, I quit smoking many years ago, and having done so have been little troubled by the problem since.

Last Saturday was a birthday party, so the idea of things not working out, of spoiling somebody's night; well, the idea was just horrible.

But it went fine. The whole cold thing failed to develop into anything significant, the voice held up. Folks danced the night away. A good gig.

Sunday morning, other than a slight blur from lack of sleep accumulating from a late night, the clocks slipping forwards into BST, and an early morning tide to catch out of Portishead, I felt fine. Sailed to Cardiff. Had a great day.

By Sunday evening, my voice was beginning to croak.

By Monday morning it was gone. 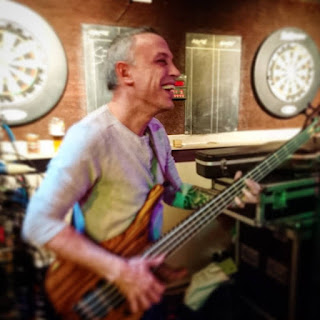 The venue that established the band's foothold in Bristol many, many years ago is a place called The Horseshoe in Downend, on the northern outskirts of the city. It was, for many years, a special place to play. The then owner of an events company called Panik, a guy called Paul, was local to the venue and routinely provided the PA and lights, which made the gig a real treat: turn up, plug in, play, unplug, go home. Over the years Paul and Mitch, the man that later bought the company from him, became very good friends of ours. We've played some fantastic gigs with them, both at The Horseshoe and elsewhere.

A random stat: between 2005, which is when I took over the band's bookings from Mum, and 2012, we played a total of 39 gigs at The Horseshoe. We probably played at least twice that before I took over the diary from Mum. The Shoe was always one of Mum's favourite gigs.

Yes, my mum used to run the band. It's always been something of a family enterprise. I'm sure I've mentioned that previously. I've been very fortunate in both my parents.

As things do, things at the Shoe eventually soured. "Argument" is too strong a term, but the bottom line was that the then landlord still wanted to pay the band in 2012 the same money he'd been paying us, and we'd been splitting with Panik, since we'd first played there in about 1993. In short, it was starting to COST us money to play the place. Panik had dropped out by then, leaving us to do our own sound and lights, so even that incentive had gone.

At the end of 2012 we dropped the Shoe from our circuit; the regretful end of an era. 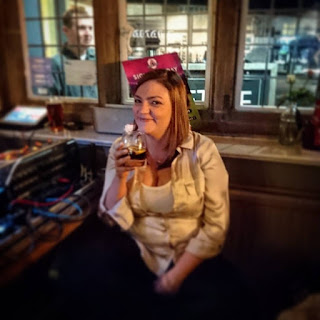 At the end of last year, the old landlord retired.

Mitch from Panik got in touch, said he'd been talking to the new management about going back there again, asked if we'd be interested in playing with them if they did the sound and lights, just like the old days.

I said of course. We go back far enough now that I'd pretty much play anything Mitch asked us to on pretty much any terms, but the Shoe I have a particular soft spot for, there is a hatful of history there. We booked a handful of dates into the 2017 calendar. The first of those, our return to a favourite haunt, was earlier tonight.

And as of the beginning of this week, I'd lost my voice.

So it's been a stressful week. Cancelled band practice Monday evening. By Tuesday, things had gotten feverish again; the cough had become persistent and was beginning to pull at things in my chest. A bad night's sleep. I'd stopped talking to try and rest things, except where absolutely necessary. Which for me was an act of supreme willpower. Specifically didn't try to see if I could still pitch a note. Didn't want to panic myself. Didn't want to use up any notes I had left unnecessarily.

I wasn't actually sure how things would play out by the time we arrived at the venue. I can't say there was ever any thought of cancelling. I'm sure it'll happen one day, but it hasn't yet. Wasn't entirely sure what I'd do if the voice failed completely, and at the back of your mind is the nagging thought that perhaps the more professional thing to do would to have been to have called it. There comes a point when you can't help but admit to yourself at least that you're just being stubborn and bloody minded.

But over the top of that nagging thought was the vague hope, or blind faith, call it what you will, that things would probably work out. They had to. Lots of old friends would be there. Dad was there. My wife would be there, my daughter had taken the night off work to come; she pretty much grew up in this place watching her Dad's band play so she was damned if she was going to miss it. I had a lot of people to let down.

Singing isn't like talking. My voice is my least tutored instrument, but arguably the one I've had most practice with. I couldn't explain the mechanics of it, but whereas your talking voice comes from somewhere that feels quite "up" in your throat, almost forward in your face, a singing voice is more of a deeper, different kind of projection.

It's not something I'm used to not having complete control over. And tonight every note was something of a lottery. It was as if somebody had reversed the order of strings on my guitar and then left me to work out how to re-finger the chords without any benefit of advice or practice.

It's been a great night, it was a great gig. A lovely crowd, quite forgiving and completely with us all the way. A fantastic sound from Panik as always. Something of a fine homecoming. I'm already looking forward to the next one.

And as I sit at home now sipping a small glass of beer to wind down before I try and get to sleep, work in the morning, I feel physically better than I've felt in days, although I suspect my voice will be shot tomorrow. But it's got a couple of weeks or so to recover before the next one, which isn't now until the middle of April.

I'll be another year older by then.
Posted by tatali0n