Calstar is now rigged up for shore power.

My cousin Vince brought his tools and expertise and an awful lot of trade-rates purchased electric cable down to the boat with us on Saturday and we spent the day planning cable-routes, drilling holes, running wires and wiring sockets. 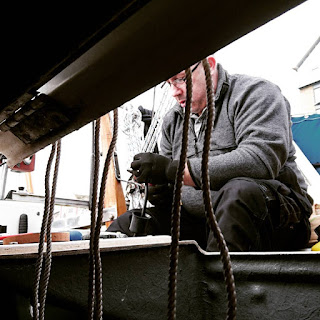 It was a blustery day, with the wind gusting straight into the boat's cockpit, but the rain mostly held off so it made for dry work, fortunately.

It was not a short day however. We now have the domestic and engine battery chargers wired up to a shore power socket, and a number of plug sockets discretely placed throughout the boat for phone chargers, laptops, tablets and the like when we're plugged in. But we got to the boat for about 1000 and didn't finish until gone 1730. Admittedly, the bear's portion of labour was borne by Vince, although being the nimblest of the three of us I was tasked with drilling the first hole from inside the cockpit locker once we'd decided on the cable route. 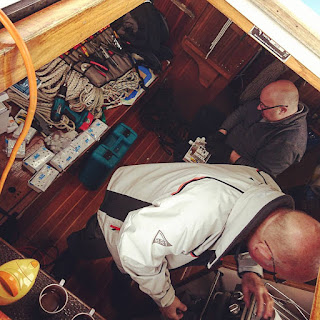 As I fired up the hand-drill, it occurred to me that this was the first hole I'd ever bored into our boat. I mean sure, Dad's drilled a few, but I'm not usually trusted with anything so, well, potentially terminal.

We didn't sink. I'll count that as a win.

Not so winning (to steal a misuse of the verb from Charlie Sheen) was the conclusion to the day.

Everything wired up and tidied away, Vince declared it was time to plug it all in and check it didn't go bang. I ran the power cable out, went to plug it into the shiny new socket in the cockpit of the boat, and realised that both socket and plug were unfortunately male. We'd all failed to appreciate that a flush socket fitting was male, whereas the power extension cable we wanted to fit required a female socket to plug into. 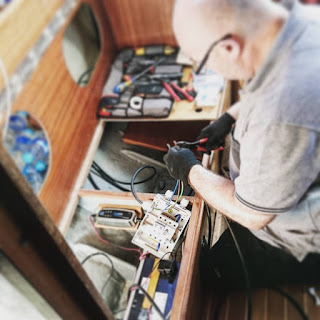 So she's rigged up for shore power, but she ain't plugged in yet.
Posted by tatali0n