Calstar is home, back safe and sound in Portishead.

Nikki, Dad and I drove down to Portishead Friday after work, abandoned the car in the marina car-park, and took the train over to Swansea. Locked out of Swansea on the earliest available lock at 0700 Saturday morning, an hour later than I was really comfortable with on the tide we had, but you work with what you've got. We then sailed up with the tide to Watchet. A 35 mile beat into a lively easterly, with an utterly uncompromising tidal gate at the other end in Watchet. I had alternatives if it all went wrong, but none of them were appealing. 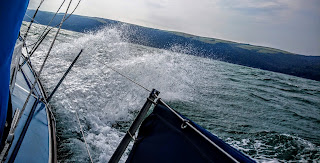 Wind over tide, we perhaps unsurprisingly found we had much more wind to deal with than the F3 initially suggested by the forecast. Calstar is a bilge keeler. This doesn't actually present as much of a disadvantage into wind as some people suggest. I've always found she points quite respectably, even with her currently blown out sails, and doesn't slough off too much to leeward, nowhere near as much as I'd first expected from the horror stories about the characteristics of twin keels I'd previously read about.

The issue is not really her pointing. It's the hull shape. Any kind of sea and she slaps through it like a winded seal, her boat speed falling away into oblivion with each impact.

The North Devon and Somerset coast is a cruel, merciless shore to get caught on if you screw the tide up. We motor-sailed, close hauled and reefed as deep as we could get, the boat still heeling to 30 degrees or more in the bigger gusts, but between the 25hp Beta Marine and the sails, she kept her speed up beautifully.

A Westerly Griffon is a very dry boat. A deep cockpit, very well protected by tall coamings,  dodgers and a spray-hood. I've never really been much troubled by spray, even when beating into 35 knot gusts crossing the deck during the Holms Race last year. She's a very dry boat. That is until you try to motor-sail upwind, close-hauled into a lively sea. Dad and Nikki were fine, comfortably sunning themselves beneath the shelter of the spray-hood. Yours truly, keeping dutiful watch over tiller and course at his habitual station at the back of the cockpit, caught every other wave fresh in the face as the doughty little boat ploughed her pointed nose and flat belly into each, time and again.

At least in the sunshine and snug in my waterproofs it wasn't cold. And we won the tide,  crossing the lowered gate at the mouth of Watchet Marina a good hour before the tide peaked and turned foul.

We spent the night in Watchet with friends. Hedley and crew of Lydney's "New Dawn" arrived from Cardiff on the ebb tide, so the evening was spent in one of the local bars with him, his crew and some new made friends from a couple of boats that had also come over from Cardiff that day. 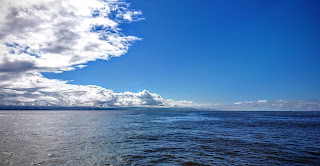 We left Watchet at 1400 for the 18 miles back to Cardiff, as soon as the gate dropped with the rising tide Sunday afternoon. I hadn't held much hope of any great sailing; only two hours of fair tide and the early afternoon forecast being light and astern, albeit expected to strengthen significantly later in the day once the tide turned foul. Clear of the harbour wall, we hauled the sails up and motored into our own apparent wind over a smooth sea. Although the sea was beginning to adopt its characteristic tannin hue of the upper reaches of the Channel, the sky above was aquiline blue, the sun warm on our shoulders. However, looking back astern, the Somerset coast was becoming enshrouded in thick, threatening cloud advancing from the west, parallel to the shoreline.

Within an hour, the wind filled in as the cloud encloaked shore fell away astern. With more of a northerly mein than expected, it was coming in across our beam, the wind with tide was blowing the sea flat, with lots of small rippled white horses now marching in from windward. Under engine and sail, the boat was moving easily along near to hull speed. I experimentally cut back the throttle, and the speed dropped of a knot to just a shade over 4.5, but with the tide fair the speed over ground was still more than 6. More than enough. I killed the engine and the tranquillity of a boat under sail, racing along over smooth water, enfolded us in accompaniment to the still persisting sun on our shoulders. 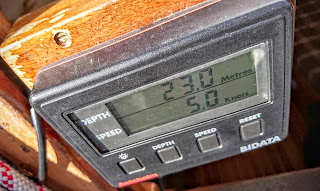 The wind increased, but the seas remained slight. Rounding Ranie Point into the Penarth Roads, the boat was showing a clear 5 knots on the clock. The instrument under-reads by a shade less than a knot; reliant on GPS and speed over ground, and still waters a rare luxury in these parts, I've never got around to calibrating it.

We locked in through the Barrage without incident and stayed the night in Penarth Marina. The forecast for Monday was south-westerly and light again. Neap tides, low water would be around 1130, so we opted to lock out at noon. Despite the unpromising forecast I was determined to sail as much as we could, from gybe to gybe if necessary. The tide alone would push us home to Portishead well before high water.

Leaving the Outer Wrack, the wind seemed relatively slight, but more westerly than I'd expected, so more promising of a beam reach than the run I'd been resigned to dealing with. The sky was blue, the sea was smooth and brown and the breeze filling in from the direction of the Cardiff shore sun-warmed. Before long we were trotting along comfortably under full sail, the clock showing a steady 4 knots. Even the race off Clevedon at the entrance to the Bristol Deep seemed subdued as we entered, watching our old friend MV Balmoral put out from Clevedon Pier and steam away towards Penarth now falling distant behind us.

We made excellent time, furling the genoa off Kilkenny Bay to slow Calstar up a bit, continuing along under mainsail alone until we started up the engine as we rounded Portishead Point. Behind us, the 57000 tonne car carrier "Bishu Highway" was inbound to Royal Portbury from Baltimore, USA, her chaperone of three tugs steaming out to greet her, passing us in the tight confines of the King Road as we turned into wind and stemmed the tide just inside Firefly, safely out of the navigation channel, Dad steady at the helm whilst I made safe the sail.

In a symphony of lovely timing at the end of a fine long weekend's sailing, the lock had just opened the gates as we entered the Hole between breakwater and mud-bank and I called up for permission to enter. We came alongside without mishap, and locked into the Marina at 1530.

Calstar was home.
Posted by tatali0n