So far this weekend 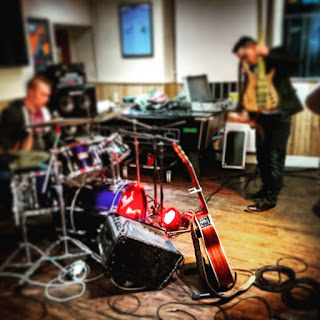 I bled on my guitar last night. It used to be a terribly common occurrence, but I grew up a little, got a little more finesse. Learnt how to use a pick. Stopped bleeding, gave my finger nails a break. Didn't do many favours for the guitar however. Last night I just caught it wrong. One advantage of a misspent youth of abusing your fingers: it didn't hurt a bit.

Still made a mess all over my strings however. And over Matt's strings, because the song that followed the song I caught it wrong, we swapped guitars as he hadn't brought his own acoustic (he'd come straight to the gig from work, no room to carry it around in his car all day I guess) 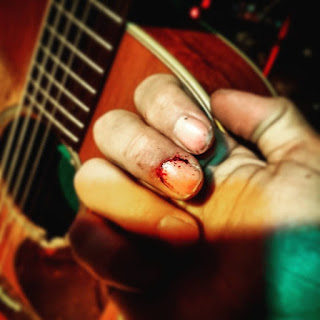 It was a great gig. The sound was lovely. Lots of friends turned up. Quite enjoyed myself. The cold I thought I'd shook at the end of last week has been making a return, so I was a little worried that it being the second gig in two days my voice would suffer, but it seems we caught it at a sweet spot; a little raspy but held out fine.

Flat tyre today. The only sign the old truck gave was a slight difference in road noise and a slight pull to the left. Subsequently I drove a couple of miles at least on the flat. So even if the puncture was repairable, it's not now. You can see the white circle of damage in the photo. First stop on the way in to work on Monday will be Thrupp Tyres.

Damned shame, as I only replaced this tyre a month or two ago. 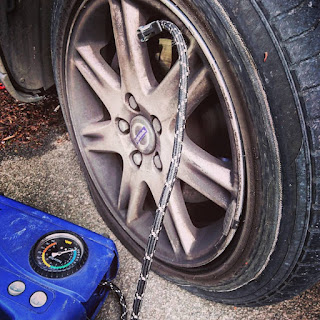 Took the dogs for a run over Plock Court earlier this evening. The park was quiet, a few other dogs about, but loads and loads of space to run.

Lilly has a new backpack. Figured she can carry her own water, her own toys and her own poo bags. She seemed to quite like it, the new wardrobe not slowing her down in the least. You do have to keep the weight in each side equal though, or it does slop over and look untidy.

She wouldn't stand still long enough to model the thing in the fading evening light, so the photo following is a little blurry. 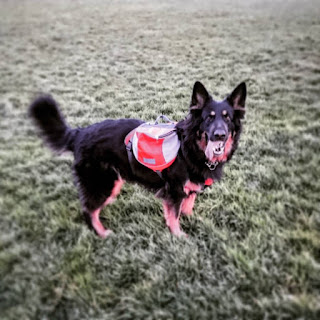 Forecast for tomorrow is a light breeze from the north-north-west. Tide is nearing springs, so high water is 04:45 at Portishead. We've not been out with Calstar for ages, so suffering an acute attack of cabin fever Dad and I foolishly talked each other into a trip over to Cardiff for breakfast tomorrow morning.

It means being at the boat for 0430 to make an 0530 lock. Leaving in the dark. Around these parts the tide decides when you sail, not (within limits) the weather or (not so much within any limit) the hour. We've not had a massive amount of practice at night sailing, something I want to address this year.

Of course, that means I've still got to get up, and get to the boat.

I'm going to have that beer. No sense going to bed if I'm not going to sleep.

So plan B is to lock out at 0830 and sail down to Hope again, should I oversleep.