With our Gloucester plans for Calstar blow away with the forecast storms, the remainder of the Easter Holiday required a little rethink but was by no means wasted. 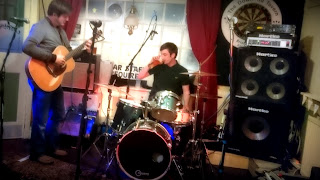 Saturday night was always planned to be a break in the sailing for a gig anyway, so required the least adaptation. It was fun, a good night but quieter than usual. I think a combination of bad weather and a four day weekend meant most folks either stayed in or had gone away elsewhere for Easter. We enjoyed ourselves through. And a lull in the weather meant the drive home afterwards back up the motorway wasn't too bad at all.

Sunday, and the weather was still squally ahead of the big stuff expected for Monday. With conditions too rough to take Calstar out, Ben and I headed over to the lake at Frampton to race "Buffy", our Enterprise dinghy. The wind was laying predominantly in the south west, sometimes lulled, other times blowing hard, with white horses dancing in serried ranks across the lake.

We threw the first race; I didn't check, so didn't realise our handicap had changed with the new season, so started the pursuit race 30 seconds too early. We sailed the race anyway, but would have placed poorly regardless. About halfway into the hour a vicious squall blew through the fleet, knocking us and most of the others flat. The other boats, single-handers all, come up dry. An Enterprise comes up from a capsize swamped and spends the next lap or so labouring through the water like a pregnant cow whilst the autobailers struggle to work their magic.

We were treated to a gorgeous rainbow as we came ashore from the race for lunch.

The second race of the day was a set of three class races running alongside each other. The holiday weather had culled our numbers, so each race had only a couple of boats competing; three races, six boats in total. In the handicap "fleet" against us was Phil in his RS Aero. It's a much faster, more modern and lighter single-hander, so the race was reduced to a time trial; we beat Phil (and everybody else) to the windward mark, but after that he powered away from us and we were left racing the clock. The weather remained squally, unpredictably foul tempered and intermittently violent.

The thing about racing one on one is that there is no second place, not really. You either win, or you lose. About half way through, Phil had a three minute lead on us, and was still pulling away. As a squall tipped us in again off a bad gybe, it looked very much like we were going to lose. Except the same squall pitch-poled Phil's Aero, and although the much lighter, self-draining hull is much easier to recover from a capsize than our old, wooden Ent, you've got to catch it first. The toppled Aero was bowled away with the wind and Phil couldn't swim fast enough. Accepting assistance from the safety boat, he had to retire. We righted our own capsize without much drama, and spent the next couple of laps cumbersomely draining the water from our flooded hull. But as the last man standing, winning the race after that was but a simple matter of hanging in until the end.

Bank Holiday Monday was a lazy day. Walked the dogs. Listened to the wind howling about the house, sprawled out on the sofa with the dogs chain-watching episodes of Spooks on Netflix. Quite out of character for me.

It was quite lovely.