Our original plan for this Sunday had been to meet up with a friend who'd intended to come down from Lydney the day before, and to sail back in company with them for on their return from Portishead on the morning tide, perhaps as far as the Beachley and the Severn Bridge before leaving them to the rest of their journey home and heading back ourselves. However, a text message the day before had forewarned us that they'd elected not to sail; the forecast looked too flat and dull to make it worthwhile, no wind worth the mention and, understandably, they didn't have an appetite for a drift.

Checking the forecasts myself, Saturday did indeed look like a flat calm, but Sunday morning looked much more promising. Despite starting from next to no wind before dawn, most of the forecasts predicted it building to around F3 by 0900 and then continuing to build through the rest of the day, with some very blustery weather and accompanying rain expected by the evening.

It didn't really make much difference to our plans. As long as the really heavy stuff held off until the evening, we were set on getting out. The last time we'd slipped the moorings on our berth was 17th October. Far, far too long to stay harbour-bound; we were getting twitchy.

Sunday morning saw Dad and I driving down the motorway to Portishead, rain hammering the windscreen. "This wasn't forecast," commented Dad, "at least not 'till later."

Best laid plans of mice and men. We were sailing anyway. Dad, to be fair, doesn't ordinarily subscribe to my own philosophy of disregarding every factor except the wind when deciding to go sailing. He'll call it if the weather looks especially wet or cold and leave me to go play on the lake, especially if we don't actually have plans to go somewhere and instead are just sailing "for the fun of it", as we'd planned for today.

His definition of "fun" is more constrained than mine. Though I'm not sure he'd put it like that.

However, it'd been so long since we last took the little yacht out that, other than his wry complaint that the forecast had been wrong, even Dad didn't suggest this was a silly idea. 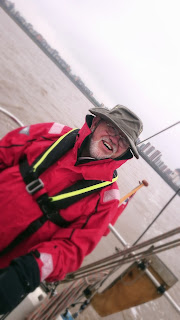 The rain had eased off a little by the time we got to the marina. The sky was still mucky and the morning damp, but not too cold, and various flags and pennants danced around the harbour-side, teasing us with the promise of wind to be found. The stall outside the marina office was, perhaps surprisingly given the day or the week, the weather and the time of year, open, so we bought a couple of bacon rolls and mugs of hot tea to carry down to the boat.

As we set about preparing Calstar to depart the rain returned but as more of a fine, soddening drizzle. We left the hood up until the last moment to keep the worst of the damp out of the open companion-way and cabin and the worst of it off the screen of the Sony tablet we use for our chart-plotter. The device itself is waterproof, but the wet can play havoc with the touch-screen.

The lock was booked for 1100, so a little after 1030 we slipped our mooring lines and headed over to the fuel barge to fill up with diesel, as the tank was over three quarters empty. It cost just a shade over £20 to fill up; and that would be the sum total of the fuel costs for just over six months worth of cruising through the end of last summer and autumn.

We locked out a little after 1100, and motored out beyond Firefly; Portishead Cruising Club's racing fleet were lining up for their start between there and the end of the pier. They had a good turnout of boats, and I briefly regretted not joining them for the race as we cleared their line with a few minutes to spare and they fell astern as we headed out over Denny Shoal and into the murk. 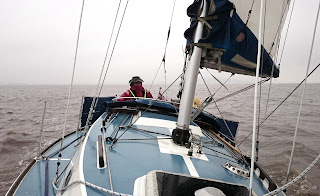 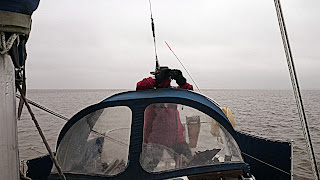 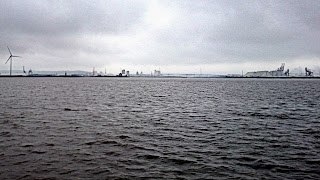 Clear of the racers, we turned into wind and hauled up the mainsail. It had been so long everything seemed somehow clumsy, disconnected, vaguely unfamiliar at first, so we paced through everything slowly, determined not to make any silly mistakes.

Then the mainsail filled as we unfurled the genoa, and we stilled the gently thumping diesel as Calstar bowed to the wind and began to dance across the water. It was chill in the wind and the wet, the dank, rain-smeared murk surrounding us closed visibility down to about a mile or so and the racing tide churned up against the wind just enough to throw the occasional light spray over the bows as the hull slapped through the chop. 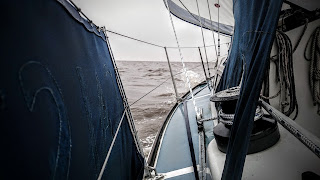 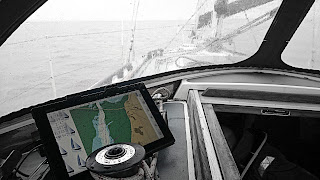 But the moment the little boat had bent to the wind, the unfamiliar disconnect had been forgotten; everything felt as it should. It felt like we'd come home.


It was a short sail, just under three hours and about twelve miles: up through the Shoots as far as the Bridge, where we decided to bear away around the Lower Shoots cardinal and head back rather than pass beneath and through to the waters beyond. We punched the slackening tide for half an hour, making barely more than a knot over the ground on a deep, broad reach, before the tide turned at last to carry us home to Portishead. 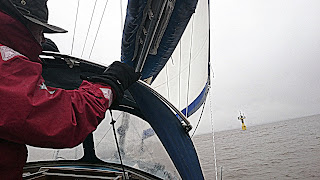 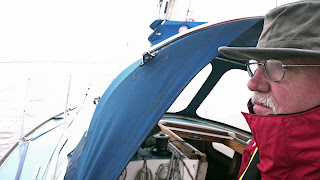