Sunday, and the temperature was back into double figures (centigrade) after our recent cold snap. Forecast was 4 gusting 5 from the south, and the spring tide promised low water at Portishead for 1354. 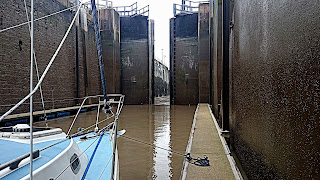 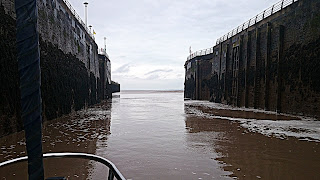 The last lock out of the morning was therefore 1100, giving us just enough water to edge out over the sill, squeeze between the breakwater and mudbanks and head out down the Bristol Deep, out beyond the English Grounds and North West Elbow. This early in the year the sun still sets a little before 1700, so not wanting to pick our way back in the dark if we could avoid it, we chose the last lock so we'd only get so far down-channel before the tide turned. There is an east cardinal marker called "Hope" that sits about mid-channel between Sand Bay and Cardiff, so I figured we'd try not to get washed any further down channel than that. Portishead lock was due to open again on the flood tide at 1600; if we could make it back within a couple of hours of low water, that would make for the perfect day's sailing. 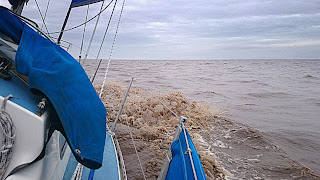 The sky was pretty leaden but the rain held off. It wasn't cold, at least not for the time of year, and the rough stuff forecast to come in later Sunday night didn't make an early appearance. Slightly less wind than expected, or so it felt to me. However, not being in a rush to get anywhere, I was, partly at Dad's bidding, very conservative with the sail-plan on the way out, starting with both reefs in the main and the genoa half rolled down. We dropped the second reef out of the main and shook out the genoa later on as we neared low water, the pace of the tide eased and it was clear the weather wasn't going to do anything unexpected. 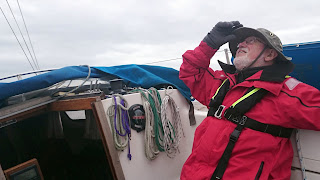 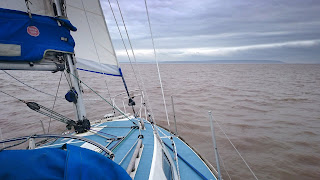 I heard Bristol VTS on the VHF report the wind speed out in the King Road (the shipping lane that runs past Portishead) as being variously between 12 to 15 knots from the south.

We beat down channel, out and around the English Welsh Grounds clear water mark and then into shore and the shallower water off Sand Point. We then tacked back out and rounded the Hope cardinal just about at low water, bearing away to reach back up channel and home to Portishead. For the latter half of the homeward leg, another Westerly, "Shear Water", fell in astern of and kept company with us back up the Bristol Deep to Portishead. VTS reported the tidal flow in the King Road as running at 5.2kts as we passed between "Newcombe" buoy and Battery Point. Our speed over the ground coming up the King Road with the wind hard on the beam and the tide under us touched 9kts. 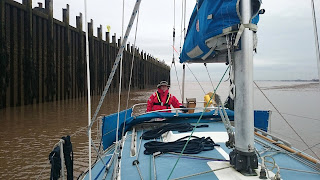 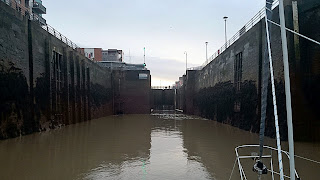 We slid in through the gap between the still proud mudbanks and the breakwater and into The Hole outside Portishead just shy of 1600. The yacht Shear Water joined us in the lock a short while later and we were both lifted back in to the marina.

Just a shade under 29 miles covered in just a smudge over five hours of sailing. A grand day. 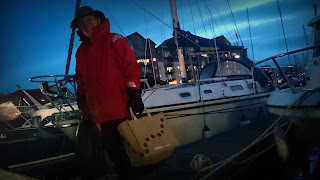