Walking Lilly around about dusk yesterday evening, the park behind my house was wreathed with tendrils of patchy ground mist. It made for an atmospheric half hour's game of ball with the dog. 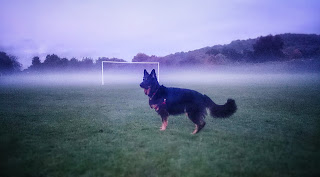 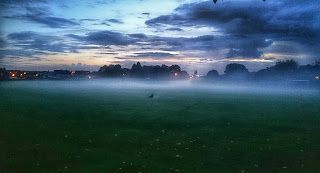 Though it should be said, Lil's idea of playing ball is, basically, I throw it, she chases it, and then teases me with it until she gets bored. Sometimes, very occasionally, she'll grace me with the opportunity to throw it for her again, but for the most part, "ball" for Lilly, like most things in her life, is all about possession.

She has the ball, I do not. I believe this amuses her.

Once she gets bored with the teasing, which rarely takes long, her basic game-plan then devolves to finding somewhere suitably removed from me, (to be sure I don't make any foolish attempt to take the ball back and throw it again - I believe she thinks she's protecting me from myself), and then she'll settle in the grass, contentedly chewing on said ball whilst she keeps a watchful eye on me as I wander aimlessly about the field, pretending I'm walking a dog.