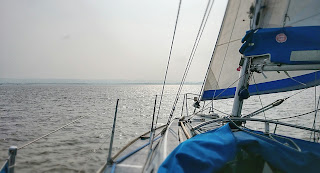 We drove down the motorway to Portishead through a thick Sunday morning fog, slightly apprehensive about the lack of visibility, but quietly optimistic it would lift, and as the motorway crested the slope above the north bank of the Avon for the last stretch of the drive down, we were relieved as the sky faded into a hazy blue and the usual welcoming view of Avonmouth and Royal Portbury Docks lay out before us.

Unusually, we had a guest along for the day, Jordan; a friend and one of Frampton Sailing Club's junior members. Although very practised and handy with boats in general, albeit with more of a bias to power than sail, this would be his first time out in a yacht, and his first time out in the Bristol Channel. 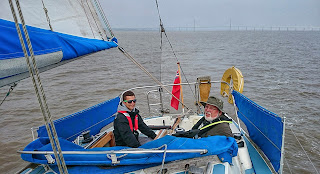 Still hazy, a watery sun was at least making an feeble effort to warm and dry the dew soaked decks when we got to the boat about 10am. Jordan expressed some bafflement at the number of "ropes" aboard Calstar and didn't really seem to believe me when I suggested it wasn't any more complicated than your typical dinghy. It isn't, but it served to remind me how intimidating the sudden change of scale can be. I was amused to discover I'd forgotten that; almost a year of sailing her now, and Ondine seems almost as comfortingly familiar as any of the dinghies I've ever owned or sailed.

I can't say the same for the Bristol Channel. That still intimidates me. 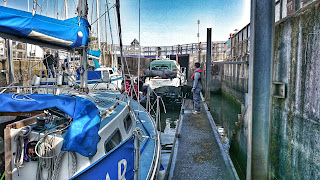 The forecast over the week leading up had been for light, almost non-existent winds for the weekend, with a lot of weather coming in on Monday. However, by Saturday, the time-frame had shifted forwards, with a east to south-easterly 3 or 4 forecast for Sunday, but veering southerly and building up in to a nasty looking 6 to 8. By Sunday morning all the forecasts were consistently predicting the heavy stuff wouldn't hit until the evening at the earliest. High water Portishead was 1220, so we were only going to be out for a few hours at most, so although I was a little concerned it might get a little rough coming back, I was confident we'd be fine as long as we got back in before the lock closed for the tide at 1615.

We cast off and shared a very crowded 1100 lock-out into the still flooding tide. We crossed the Kings Road channel under power, and with the Denny Shoal Cardinal safely falling away to our stern as the tide pushed us up channel, put Calstar head to wind and raised her full sail before silencing the engine. Visibility was hazy, no more than a few miles at best. Back in the Kings Road, we could see three tugs putting out from Avonmouth to head down channel to shepherd an inbound cargo ship into Portbury.

Calstar heeled happily to the wind. Fetching in off the eastern shore across the tide, it was smoothing out the water. Close hauled to a benign breeze of no more than about 10 knots, it looked like we might lay the first bridge in one tack; across the wind-smoothed seas the little yacht was beating along comfortably at four and a half knots through the water. As the tide on our lee bow carried us up the Shoots, our speed over ground touched 8 knots at times. 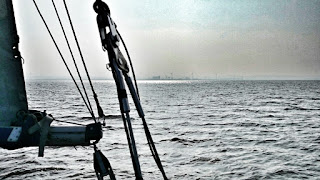 Dad went below to make us all a cup of tea, but as we closed on the Bridge, either the slackening tide or fickle vagaries of the wind headed us. It became obvious a couple of tacks were going to been needed to beat up under the gargantuan span, so we belayed the promised bacon butties until we were through. 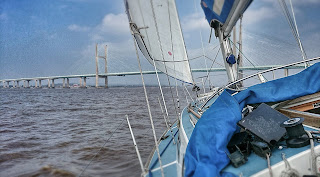 We passed beneath it, Jordan's neck straining as he looked up to take it all in. It doesn't matter how many times you might drive over a bridge, sailing under one always gives a different perspective and appreciation of the thing. 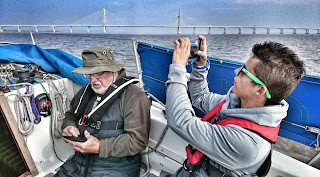 We tacked at Charston Rock, but as we did so, the wind, failing with the top of tide, lifted against the tack, so we tacked back in short order, and then I relieved the autohelm for a while as the breeze became light and tricky with the stalling flood. We drifted up with the fading flow, keeping the genoa filled, close hauled on a starboard tack, soaking in the hazy sun and bucolic views accompanied by the delicious smell of the now frying bacon. 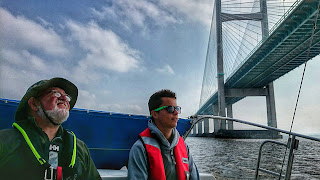 By top of tide, Chapel Rock and its ancient ruins of St Twrog's chapel lay a cable's length abeam to port and the bacon sandwiches were just a memory and an after-taste to be washed down with another cup of tea. Dad makes an excellent galley slave. The tide turned, and with it the wind veered and filled back in from the south. We hardened up, tacked lay to a port reach back down channel, retracing our patch back to Portishead. 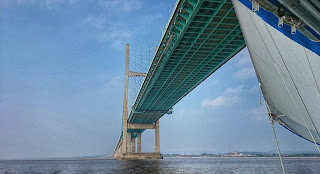 Passing Charston again, we hardened up to close-hauled. Despite our heading, the projected track line on the GPS was now suggesting we were going to hit the bridge footings. Dad and Jordan stood by ready to tack if we needed to, but as hoped ("anticipated" would suggest too keen a foresight), the flow of the tide through the turn of the channel as it swept past Old Man's Head and under the Bridge lifted us beautifully and we were flushed out and into the Shoots with boat lengths to spare between us and the unforgiving concrete. 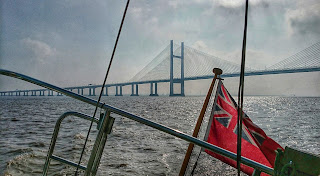 The wind filled in for a long fetch close-hauled back to Portishead, but the sea state stayed smooth, merely ruffled by the fresh breeze and our little yacht skipped along, bowed gracefully over to the breeze. We started up the engine and dropped the sails over Denny Shoal, put out our lines and fenders and at 1428 called up the marina on the VHF at to request a lock as we motored gently past the pier-head and into the shelter of the Hole. 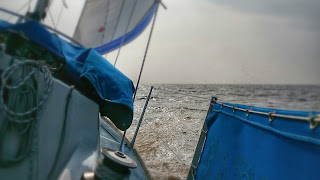 A lovely, hazy autumnal day's sailing. Three and a half hours underway, an average speed over ground of 5.1 knots, a maximum of 8 knots and 17 nautical miles covered.

It was a great day. Thanks for letting me tag along