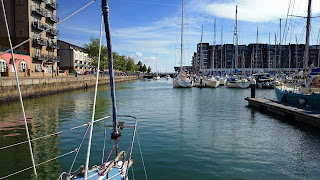 Reflecting back on Sunday's sailing.

We're getting much more used to trotting along close-hauled with the boat tipped over at what once felt like seemingly silly angles. And much more practised at putting in or shaking out a reef whilst under way with minimal fuss or disruption. Which stands to reason, as it's hardly a tricky procedure with the setup we enjoy with Calstar. I actually found the reaching back to Portishead much harder work and more stressful than the outbound beat. Reefing does seem to slow her by half a knot, despite various folks with Westerly boats assuring me that what speed we lose with sail area we'd gain from the boat being stiffer. However, I guess half a knot when we're looking at average speeds over the ground of 8 knots plus isn't all that much, and what we do save is in not sagging off to leeward so badly when the big gusts hit. I don't know how many Westerly owners actually race. Then again, my principle interest here isn't racing but learning to handle the boat as she deserves.

Mind you, finishing in the top half of the fleet is a bit like catnip to the dinghy racer in me. 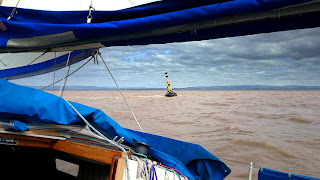 A useful tip I did pick up from the friendly folks on the owner's association mailing list was to put the first few rolls into the genoa before putting the first reef in the main, rather than the other way around. I believe this is because we're set up with a masthead rig rather than a fractional one.

I think the handicap system really stung the bigger, faster boats on Sunday. Mainly because of the tide. Because we were so much slower getting to the final windward mark at "Tail Patch", we had much less of an adverse set for the fetch across to "Cardiff Spit" before turning back downwind and into the still ebbing tide. On the final beat to Tail Patch, I was watching the rest of the pack about a mile ahead of us crossing the gap, and they all seemed to get pushed much, much further below the rhumb line than we were. Likewise, once we rounded Cardiff Spit, we only had to punch against the ebb for about an hour before it turned, whereas the rest of the fleet, having pulled that much further in front had both still a stronger out-flowing tide to push against and the need to do it for significantly longer. 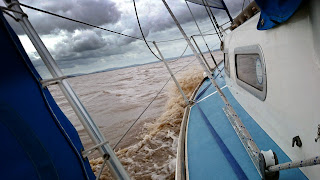 I think that probably eliminated most of the speed advantage they gained from either size or sail-plan. They were all, without exception of course, flying spinnakers all the way home and so I suppose they had a much more comfortable ride than us. Never really thought about it till now, but I guess the tide around these parts is worth double your waterline length and a kite.

I don't know if gybing from reach to reach was quicker than just setting a dead run and dealing with the collapsing genoa. There was no way we'd have had the stamina or focus to have kept the sail goosed the whole way back by hand without a pole to help. And I suppose rigging a pole would've meant I'd have had to have gone forwards, which always panics Dad. 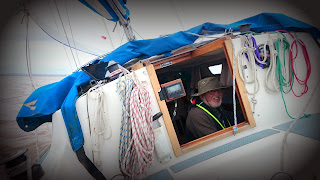 I was also deeply concerned about the possibility of an accidental, all-standing gybe with the often contrary and confused following sea we had, especially before the tide actually turned. I've noticed you don't really get slack water of any description around here. At the bottom of tide you get what feels like a bit of a frenzied and ill tempered squabble between the ebb still running out and the new flood now trying to flush back up against it. It can make for a very uncomfortable and choppy crossed sea.

Maybe rigging a preventer on the main would have been the answer, although perhaps that would have been over-kill and something of an unhelpful complication. In any case without the pole we had no way of keeping the genoa reliably goose-winged. I heard Bristol VTS (based at Avonmouth, they control the commercial traffic in these waters) advise an inbound "Welsh Piper" (an Avonmouth based dredger; we crossed paths with her the previous week on our Holms run) that they were clocking wind-speeds of up to 20 knots for the last half of our homeward leg. It generally felt a lot less than that, but of course we were running with it, as was the tide by then. 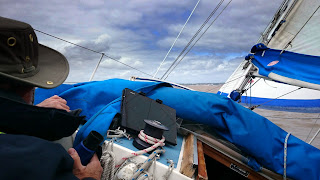 In conclusion, I did enjoy the down-channel race. I'm glad we explored down that way around the Holms on the spring tide previous, because that gave us a bit of a clue as to what to expect. And I'm glad we did the race yesterday, because aside from the invaluable practice it gives us a bit of a feel for how the Holms Race should go later this year in September. Although there will be a lot more boats involved in that one, which will complicate things somewhat. 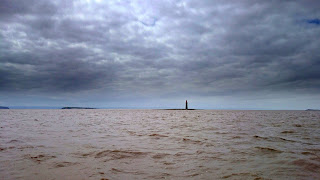 When sailing our Ent, a crowded start line is just all part of the fun of the occasion. But everything is bigger and heavier and much more expensive with Calstar, so I can't say I find myself especially keen on crowds any more.

We've had Calstar lifted out and the damage to her bottom checked, following our altercation with the lock gate locking back in on Sunday. As I'd thought, it's fairly superficial, but has grazed through the epoxy and into the glass-fibre matting beneath. She's going to need rubbing back and patching before she can go back in the water. There is a small chance we may get this done before the weekend, but only a very slim glimmer of small. Which means our plans for the coming weekend away are quite possibly scuppered. 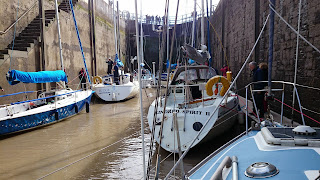 Which will be disappointing. We've been looking forward to this weekend for a couple of months now.
Posted by tatali0n