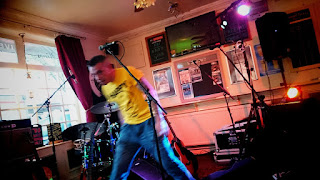 Didn't sail today. Went down to the boat, but decided, reluctantly, that the 20 knots plus out in the channel was an unfair imposition on the poor girl.

So checked over the anchor chain and saw to various other bits and bobs, then headed home.

Almost as much wind due in tomorrow, so going to go play on the lake with Hels and Buffy instead.

Gig first though. And not an early start tomorrow, don't need to be at the Club till noon.