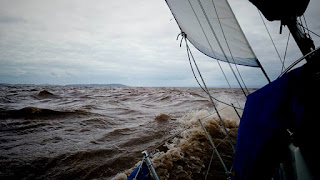 Saturday was all about spending time with the dogs and family. Not necessarily in that order. The first Saturday night in many weeks I've not had a gig though, so was a pleasant rest.

Sunday was an early start. Got to Portishead by 0815, and was locking out aboard Calstar by 0930. By the time the lock went down, we just caught the 5 minute gun for the start of the race, and through pure accident found ourselves just crossing the line with our sails up and engine off as the clock ran out on the starting time.

Long beat to windward. And by that, I mean about two and a half hours. F4 on the nose all the way, we started out with no reef in and within the hour, had a few wraps in the genoa and both reefs in the main. And were still heeling 20 degrees and averaging 4 knots, which is about right for our little old boat when she's pushing to windward.

There were moments when the gusts hit where we were heeling to 30 degrees and touching on 5.5 knots. I'm getting used to the idea of trusting the boat to look after us to windward, and to not panic and pinch. She doesn't like pinching, she just slides to leeward in protest. But if you just hold steady, she seems to pay back the trust in full.

Oddly, the auto-helm taught me that. And, upwind, I think it's still the better sailor.

At 1156 we rounded "Tail Patch", bore away briefly, and then the wind headed us just as I dropped the rolls out of the genoa, and we were close hauled again.

We managed to fetch the mark at "Cardiff Spit" and bore away, taking Monkstone to starboard at 1240. We then had to manage the long run home via "EW Grounds" pretty much dead downwind. 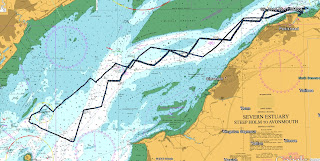 We don't have a spinnaker, and the extension lock on the spinnaker pole we do have is currently seized, so that being out of service, we couldn't pole out the genoa on a goose wing without having to tend it continually. The wind was pushing 15 knots plus by now, so I ended up covering most of the ground back home again by gybing from one deep reach to another. With the genoa now completely unfurled and both reefs shaken back out of the main, the speed through the water occasionally touching 6 knots as the wind continued to build.

There were a couple of ropey gybes, especially as the sea built to a couple of meters off Cleavdon and, breaking frequently, turned to take us broadside. The little boat managed much better than my nerves. At one point, having gybed back onto port, I bungled it, and was struggling to get the genoa back in so as to balance the main whilst still keeping the boat on course. I actually ended up asking Dad to come back up from below to help; I'd sent him down a couple of easy gybes previously to make me a much needed cup of tea.

However, this time around, the pressure in the main kept trying to broach us without the balance of the genoa. I was beginning to regret having shaken the reefs out, but couldn't put a reef back in without turning back head to wind, and so loosing precious time.

So my cup of tea was a little delayed whilst Dad helped me get the boat back under control.

Within sight of the headland of Portishead, my craving for tea now sated and Dad back above deck, he took the jib sheet and goosed the Genoa for the last couple of miles, and we turned onto a dead run.

We crossed the finish line just under six hours after having started, with 36 miles covered.

To my surprise, after they adjusted our time for the handicap, of the 10 boats that raced, we took 4th place.

Which would have been a perfect end to a perfect day. Except, on locking back in, Dad slipped whilst going astern to adjust our position, squeezing, on instruction, into the somewhat crowded lock, and knocked us hard astern into one of the struts of the lock gate.

It's a tough old strut, and I doubt it noticed we were there.

Poor Calstar has a nasty gash on her bottom though. It scraped through the antifoul and outer layer of epoxy and has damaged the matting of the hull, about an inch below the waterline. The hull isn't breached, and it's not a huge scar. But it's going to need urgent attention to patch it up.

Though the news that we came 4th seems to have picked him up again. Why they call this one the "Plate Race" I still do not know. But it was fun, and a great day's sailing.

I appear to have a sunburned nose. Must mean summer is on it's way.