A happy reminder of Golant

Last week, Web Chiles posted to his journal at www.inthepresentsea.com a couple of photos along with a description of a pretty little gaff-rigged cutter that had sailed past him where he's currently moored in New Zealand's idyllic Bay of Islands. Somebody later identified it for him as a Golant Gaffer.

The name of that place brought back some happy memories.

The pretty little boat may have been in New Zealand, but Golant, for which I suspect the boat is named as the designer, Roger Dongray, is based just up river from there in Lostwithiel, is a small village on the banks of the River Fowey in Cornwall (despite the spelling, it's pronounced foy).

I adore Fowey, and since I returned to sailing, have been there any number of times over the years.

Back in 2009 we booked a cottage for a week with Mum and Dad in Golant (interestingly, I seem to recall the locals pronounced it g'lant and were exceptionally enthusiastic in correcting the unintended slight of any mispronunciation they encountered). The village is a few miles up river from the actual town and harbour of Fowey and for that first weekend there I was racing with friends at a British Moth event down in the harbour. 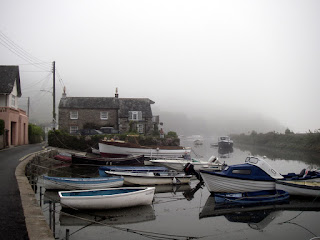 Golant is a gorgeous spot, the cottage was right on the water's edge and there was a good pub handy, just a stone's throw of a walk away along the bank. Ideal, in certain respects. 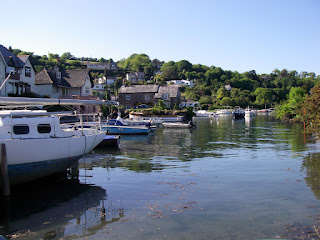 But not for a sail boat. The little bay Golant is set in is cut off and sheltered from the main flow of the river by an industrial railway track serving the china-clay dock further down-river. The track is little used, and so quiet and no real imposition on the village or cottage. In any case, when they do pass, the trains are long, lumbering and slow. They add more character than disturbance. But the track is terribly inconvenient in its placement if you have any kind of a mast on your boat. 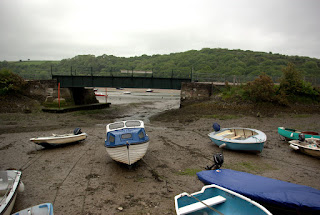 There was access to the river via a bridge opposite the cottage except, unfortunately, the bridge had a clearance of about 5' when the tide was in, and not much more when it was out. Admittedly, there was a level crossing over the track and a slipway that we'd spotted on Google Maps when we first booked the cottage, about half a mile downstream where I could rig and launch. But with the tide in, space to rig there was a little tight as there were overhead power lines that we'd not spotted on Google running along the railway track, so you had to rig the boat on the actual slip. 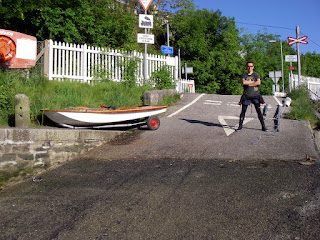 Added to that, it was quite a walk from the cottage, carrying the mast, boom and sail and dragging the dinghy all the way there on its trolley.

Not too bad first thing in the morning when you're full of energy and enthusiasm and raring to go, but having then spent all day racing down in the harbour, it became a quite different prospect on the return. On that first Saturday, once I'd sailed back up river to Golant having finished racing in the harbour, I decided to take a more direct route back to the comforts of the cottage. 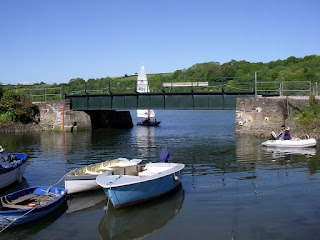 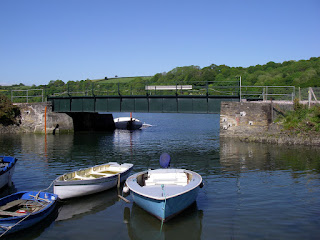 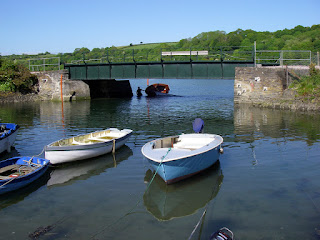 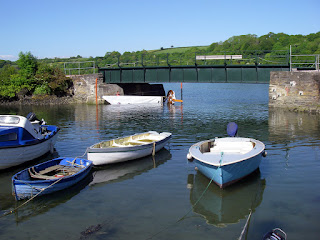 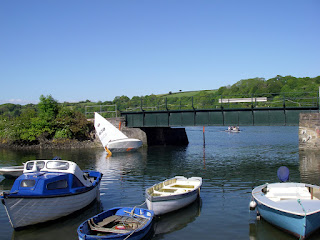 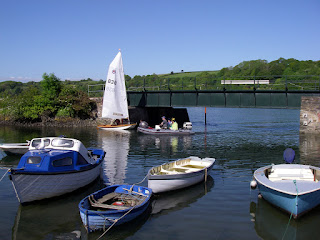 The guys that came in aboard the tender just behind me had stood off patiently out in the river whilst I manoeuvred the dinghy under the bridge, watching with barely concealed amusement. As they passed, they commented, "You must be really desperate to get to the pub, mate!"

Although I seem to recall they didn't offer to buy me a drink, the scrubs.
Posted by tatali0n