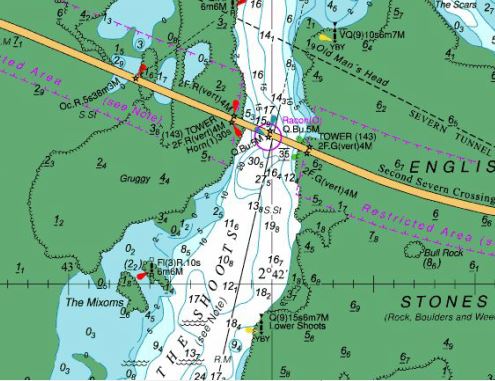 The stretch of water known as "The Shoots" that I wrote of in my previous post are worthy of their own special mention on Admiralty Chart 1166: "Tidal streams through the Shoots may run from 3 to 8 knots. There is practically no slack water."

The almost casual wording of the description has always amused me.

Truth be told, when we went up there last Sunday, although passing under the bridges was both majestic and the realisation of a long held ambition, the actual flow of water was anticlimactic and left me feeling a little underwhelmed, despite the fact that we were in the grip of the biggest flood tide in eighteen years, on a stretch of water with the second highest tidal range in the world.

Our guest photographer, Bob, did seem somewhat impressed by the flow, and enchanted by the whirls and eddies of the current rushing around the footings of the bridge, but in my head I was comparing it all to our old stamping grounds further up river, over Saniger Sands off Lydney, or beyond Sharpness and up into the aptly named Noose.

Not that I'm belittling the waters off Portishead or up-channel between the bridges. I know that if I do, at some point they'll probably try to kill me. They may even succeed, and I'll be far from the first, or I expect the last, to receive a pointed reminder of that lesson. I don't think anybody in the Bristol Channel ever looses a deep and cautious respect of the waters we sail on, if for no other reason than a very fundamental form of Darwinism keeps it ruthlessly reinforced.

On the subject of up-channel, my old friends from Lydney did successfully complete the Gloucester Ring again last weekend. Around the time they launched off Lydney Harbour, the incoming tide was clocked on GPS running at 9 knots a couple of dozen yards out from the breakwater. A little later on and further up river on the first leg of the Ring, they clocked it running at 12 knots.

That is a brutal pace for such a brutally large body of water to be moving at.

In other news, Sunday's forecast is now a F7 gusting 9. If anything, the weather seems to be coming in earlier and blowing harder as the week moves on. Talking about it down the club in Portishead yesterday evening, the general consensus is that most of them will stay at home. Wind like that, I'm not even certain racing the Enterprise at Frampton is a sensible alternative, though I might try it. Sometimes it's worth just turning up to see if it really is as bad as all that, and if you don't show, you'll never know what you missed. 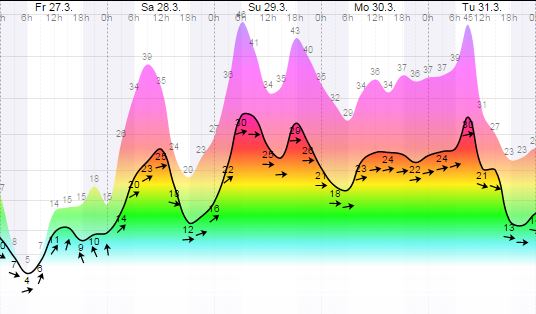 Frustrating. However, as a somebody pointed out yesterday evening, that's just how it goes, and we've got masses of sailing to look forward to in the months to come.
Posted by tatali0n