Stan; The Management; Not a Sunday to Solo 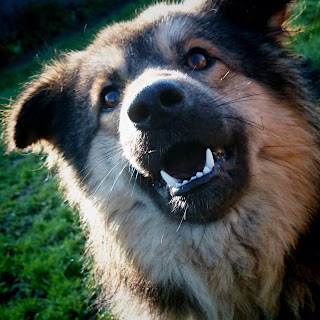 The picture is Stan, taken last Saturday at Droveway Kennels, when we
picked up his kennel mate Luna to take her to her new foster home in
South Somerset, but had to leave him behind; a question of fees
outstanding and no suitable foster home to take him to.

We're going back for him this coming Saturday. The Rescue has, with the
hugely generous support of its friends and members, raised the money to
cover the significant but not unreasonable fees owed to Droveway, and
we've secured him a foster home in Weston. One of the trustees of the
Rescue with lots of experience with shy and nervous dogs has agreed to
take him in.

It's a relief, and a weight off my mind, even if it does mean a whole
Saturday's worth of driving around the South West again for yours truly
before the Saturday night gig.

The gig is a Christmas bash for a Bristol biker's club called The
Management MC, which should be a bit of fun. Ben, a long time, good
friend of mine and the Band's is a member, and was asked to organise
their party, but got let down by the band he'd booked at the last
minute, so asked us. We had nothing booked that Saturday at the time
because our drummer was booked out elsewhere (doing a school musical of
all things, not exactly rock 'n' roll, but earns a living) and the
guitarist had his own work's Christmas party to go to.

But it was Ben asking, so we've asked our friend Jake to stand in for
Bean on the drums (miraculously, he was free) and our guitarist Matt has
forfeited his deposit for his work's party and said he'll come play with
us instead.

I'm looking forward to it, despite the long-haul day I'll have to get
through first.

The rewards come Sunday. Hels is back and will crew for me, so I don't
have to rely upon that wastrel eldest son of mine not oversleeping
again. It's not going to be a Sunday to solo the Enterprise. Windguru is
suggesting 12 knots gusting 23 from the west; seems almost too good to
be true, but I've double-checked with the Met Office forecast and that's
largely the same, so I'm going to cling to the hope.

Temperatures are finally dropping towards winter. We've had a hard frost
or two this week, and the Sunday looks like it'll be a little above
freezing. But the wind should need more than enough work to keep us warm.

First race is 11am, second 1pm, so should be home to walk the dogs just
after dusk.
Posted by tatali0n