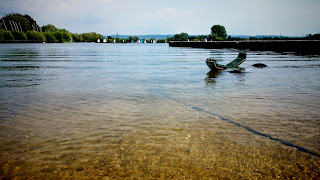 Light, shifty winds; challenging, tactical racing. Only able to sail the one race out of three because of the gig, so didn't qualify.

However, took third place out of nineteen boats in that one race, so quite pleased with ourselves.

Third race running I've had to take penalty turns for obstructing another boat though, so really do have to teach the crew to keep a better lookout.

Each and every collision has been my fault, not the crew's. Lucky this time though. The turns let the moth get in front, but we caught him again, and the laser chasing us death rolled on the next run, so we left him behind.

Didn't want to leave, then again, enjoying the gig, so fair trade.