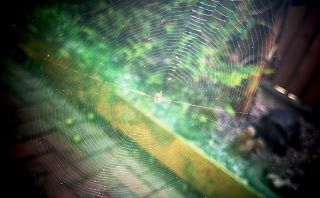 Just read an evocative article by Allan Little, a war correspondent for
the BBC.

The closest I've ever come to any personal experience of war was
narrowly missing the Invasion of Kuwait in 1990 by mere virtue of
fortunate timing. We lost our home, or at least the home I'd associated
with my childhood. But we'd kept another back here in the UK to fall
back to, so the loss was mitigated. Aside from the loss of many personal
possessions and the family dog, who hadn't come back to the UK on leave
with us, it was mostly an emotional wound.

Others lost much, much more.

It's funny though. I recognise the disconnect Little quotes another war
correspondent, Dexter Filkins, as describing, "'Oh definitely,' I told
them, and then, usually, I stopped. In the beginning I'd go on a little
longer, tell them a story or two, and I could see their eyes go after a
couple of sentences.'"

That's not specific to war. That's the disconnect of alien context,
where the other listener can't relate to or empathise with something
they have no direct experience of themselves. On first returning to the
UK, folks would at first be fascinated to learn I'd grown up in the
desert, and then after a sentence or two, their eyes would glaze over.

On describing his own first experience of war, coincidentally, that same
war I narrowly missed, Little described why he chose to go:

"Because it's why I came this far. And because if I don't I will never
forgive myself. I will have chosen a safe and cosseted life and I will
spend the rest of it regretting that when I was tested I didn't go."

It occurs to me that this is man's common vanity.

It is why we allow politicians, circumstance and indeed our own biases,
emotions, ambitions and fears, to manipulate us into fighting wars.

Why Dye and Brockbank crossed the North Sea, Hillary and Norgay climbed
Everest, what led Shackleton to Antartica. The list goes on and goes
back throughout history.

Beneath all the complexity, behind all the smoke and mirrors, we are
fundamentally simple creatures.
Posted by tatali0n