Times they are a changin' 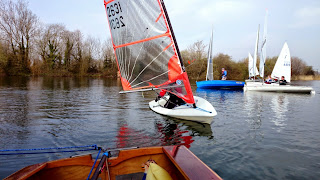 Been mulling over the results of Sunday's racing, and in particular, the
changed format for the Club Championship races, of which Sunday was the
first.

Traditionally, the Championship races have always followed the format of
three races of about an hour each over the course of the day. Races of
around an hour in length are fairly typical for our kind of boats. The
Race Committee, in their infinite wisdom, decided this year to spice
things up a bit by changing the format to six races of half the length
each, run in three pairs back to back.

I don't know why. Some things just are.

I tend to be fairly change resistant. I get bored with routine, but I am
fond of the comfort of the familiar. This is a contradiction that's
plagued me all of my life. So whilst I instinctively rebel against the
idea of changing the race format, my inclination is to suck it and see
and know better than to trust my first instincts. Change for the sake of
change is not good. But the greater peril is always stagnation.

My first thought is that in changing it to six handicapped races, we've
lost my favourite kind of mixed-class racing, the pursuit. Then again, I
sail one of the comparatively faster boats on our water, so in any
pursuit I get to do the chasing. I'm not fond of being chased, that's
just a game you play not to loose rather than a game played to win. It's
not the same.

I also think that by doubling the number of races and halving the
duration, we've introduced a significant random element. The start is
always the most stressful part of the race, with lots of drama, close
boat on boat manoeuvring and everybody on top of each other, all
competing for the same space on the water. The only other point that has
an equivalent amount of stress and aggression comes a few minutes later,
after the gun, when all those boats get to the windward mark around the
same time.

Any start at club level is always a lottery in itself. It's all very
well knowing the rules yourself, but you can guarantee that about half
the other boats on the water will only have the vaguest acquaintance with
how those rules apply specifically to the start, and of that half, a
small minority will inevitably attempt to apply their ignorance with a
high degree of opinionated aggression.

Of the five races we sailed on Sunday, we had one brilliant start, one
mediocre, and a couple of middling ones. And one which should have been
fine, except we got rammed by a Laser barging in on us from windward,
reaching in from well above the layline at speed at into a gap between
ourselves and the inner distance marker that simply didn't exist.

I'm generally a nice person, and don't like hating. But whilst we were
busy trying to untangle ourselves whilst the rest of the fleet sailed
away, he snarled "Well, at least that spoiled your race as well" with
such acrimony that it was patently obvious that he thought we'd rammed
him on purpose. I have to confess, much as I like the man off the water,
it did make my blood boil. And the thing that I think really gets me is
that, from his comment, I'm pretty sure he has no idea what it was he
did wrong, and just assumed I was being hyper aggressive with my racing
in not giving him space. I had no space to give him.

He did ruin our race for us, but we had a discard. And, obviously, we
still beat him.

So starting is always a bit of a lottery. And if you get a poor start
(leaving aside the completely ambushed start that became our discard) it
can take most of the rest of the race to recover from it. Of course, if
they've cut the race time down by half, it stands to reason that you're
simply not going to recover.

On the other hand, as my faithful crew Hels pointed out to me after the
ambush, if the race is turning into a disaster, you've only got a short
while left to endure it before it finishes and you can wipe the slate
clean and start again.

There are some more positives as well. Our habit is typically to do well
for the first half and then struggle to hold onto the advantage we've
won as the race wears on; all the little mistakes begin to pile up and
our concentration begins to wane. So by limiting the race to 30 minutes,
in many ways they make it easier on us.

And it makes the racing closer. For example, across a full hour we have
to beat a Solo by a couple of minutes to actually beat them after the
time has been adjusted on handicap. Across half an hour, we've only got
to beat them by a little less than a minute.

I'm not sure this is entirely fair on the Solos or other slower boats,
but then I don't sail a Solo.

On balance, I think I definitely prefer the full hour format. On the
other hand, five half hour races over the course of our first day back
on the water (we didn't sail the sixth) was quite good fun and there was
a broad range of conditions across the day to play with.

Next Sunday we're back to the traditional Spring format: two races of a
full hour each in the afternoon, a pursuit and then a general handicap.
Really looking forward to it.

Meantime, the clocks have leapt forward with daylight saving so we've got
an extra hour of light in the evening. The sky is blue, the weather is
warming, and today is my birthday.

It's all good.
Posted by tatali0n