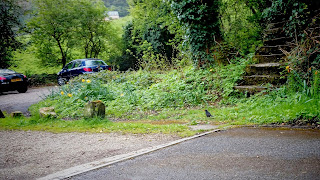 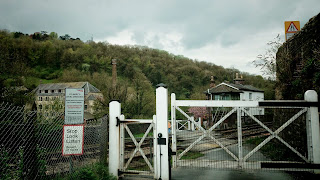 Back to the usual grind today, following my week off refitting my kitchen.

Of the two photos, the one is from the gates of the level crossing
looking down towards our office (the big old mill in the background) and
the other is of my friend, Sixpence. He hasn't been sat in his (now
enleafed) hawthorn today. I'd missed him, and was actually wondering
about him as I was walking back into the office after fetching my lunch
earlier, just after taking the afore mentioned photo of the crossing in
fact. Then he hopped right across my path, his own lunch by way of a
worm in his beak.

Good to know he's still well, even if I've missed his singing today.

The kitchen that was last week's grind and obsession was a long overdue
promise to my wife, finally delivered in exchange for a long weekend
away with Dad and friends in Fowey, Cornwall, towards the end of May,
whilst she stays at home to look after the dogs.

I have, in an odd way, enjoyed the seven days of hard, manual graft.
Though if there's a next time ashore I'm almost certainly going to save
up and pay somebody else to do it for me.

Not that I intend to ever have such a next time.

Dad's help has been invaluable. Although neither of us are practiced at
this sort of thing, he's got the physical skills, mechanical wit and
years of practical experience to carry this sort of thing through. I've
got a bit of logic and some practiced problem solving ability, but am
very much the pauper in this exchange.

I've learned a lot though. Removing a bunch of appliances and cabinet
carcases and then refitting a different set of same, most previously
salvaged from somebody else's kitchen, proved to be as much an
intelectual exersize as a physical one.

The time sink turnout out not to the the inevitable hard graft of
measuring, sawing, drilling and screwing, but the problem solving needed
almost every single step of the way. I quite enjoyed the problem
solving, though was frustrated by the way time was just soaked up and
the deadlines overrun.

Though we do now have a (mostly) working kitchen sink, a (mostly)
working stove and the washing machine and tumble dryer are plumbed back
in, so despite the number of jobs still outstanding, the situation is
survivable and no longer urgent beyond a deep felt desire to see it done
and done with.

Though maybe now I've had a bit of practice, I might try putting up some
shelves and fixing a few doors elsewhere in the house when I find an
evening or two spare. I'm feeling less intimidated by the concept of DIY
than I have in years. Can almost see the charm and attraction in it.

Then I realise that it's mostly cutting into time I'd otherwise have to
go sailing.
Posted by tatali0n