Halftime at the Railway Tavern 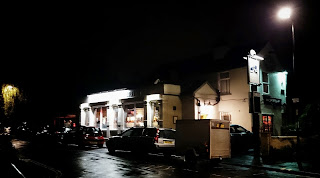 And it looks like it'll be a wet drive home later tonight.

First set appeared to go down a storm. I love this place. Lovely people, and we've been playing down here so many years now it always feels like coming home.

One of the new songs, a number by The Cure, went a bit south. Entirely my fault, which is annoying. The crowd are very forgiving though, and determined to enjoy themselves.

My acoustic seems to have been fixed. The jack socket has been playing up badly of late, unusably badly.

Matt, our guitarist, took it home with him after the last rehearsal. He's a clever man, and the Taylor is now sounding sweeter than she has in an absolute age.

Back on in a couple of minutes.