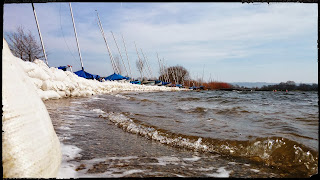 Spent most of today at the Club, inspecting and maintaining the Topper fleet in preparation for the start of sail training at the end of the month.

A brisk wind in the south, still pushing the water up over the north edge where we removed a section of bags to launch a RIB. Not good. Without the bags in place, the lake would've been back in the village today.

On a brighter note, the Topper fleet is good to go, and it was a pleasant, blue skied morning by the lakeside.

And I've hopefully finessed my way on to a powerboat course running at Thornbury Sailing Club in a couple of weeks. The course will undoubtedly be useful, but to be honest, the main lure was really the chance to get afloat again,  even if it isn't under sail.
And it's out on the River. I've been missing the muddy old thing the last few months.

Thornbury Sailing Club is based on a pill a few miles downriver from Lyndey on the opposite bank. It's a much bigger, more active club than Lydney, with a very active racing and cruising community.

I've sailed from there a few times. The slip isn't as well founded as the one at Lydney, so not as good for launching the Lugger. This is why we ended up joining the latter when we went looking for a club based on the River, even though Thornbury is closer, has quite close links with Frampton, and I've a few friends that are members there.