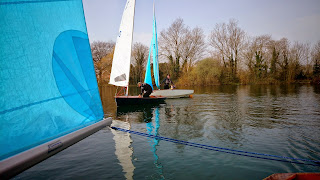 Finally back on the water yesterday. I can't say how good it felt to be under sail again.

Managed a credible 7th place out of 28 (21 qualifying) so quite pleased. Conditions went from light to reasonably frisky back to light again over the day, with the wind veering through almost 180 degrees.

The blue sails to our leeward in the photo above is another Enterprise, crewed by my friend Phil Kirk and his son Alex.

It was, at eighteen months, Alex's first race. He managed the toy cars in the cockpit, and his dad managed the boat. They beat us soundly, taking 3rd overall.

Not Phil's usual performance, he normally beats everybody, but a good first showing for his crew, I think.

Phil is planning to circumnavigate the UK in a Wayfarer at the end of May with his friend, Jeremy Warren. They want to manage it within 60 days, which would set a new record for the boat. The current best is 78 days.

The plan is to launch from Weymouth and head clockwise, taking it in a series of 200 mile legs, each of which should involve about three days and nights at sea.

I think they're in for quite the adventure. I'm almost jealous. Almost.