We've been back home now for almost two and a half weeks, have since returned to racing at Frampton, dived head-long into the start of the Sail Training season and even been away again with H and Penny for a day to race at our first Enterprise Open at Bristol Corrinthian last weekend. 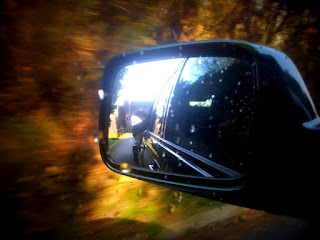 Not having the Lugger kept on a mooring within walking distance really does cut down your sailing time when you've (a non-sailing but eternally patient) wife and family in tow, so whilst next year I think I need to redouble my efforts to find somewhere on a waterfront that accomodates both boat, dogs and the usual eight souls (I'm thinking Helford maybe), I think the little bungalow in Crinis Close, Carlyon Bay did us just fine for our Easter break in Cornwall this year and we did, admittedly, have some fine weather to enjoy. 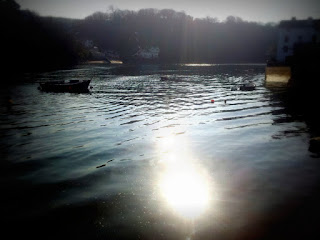 Despite the need to keep the boat on her trailer on the drive for the week, Dad, H and I did manage to slip away for a couple of days on the water in between day trips to Padistow, Tintagel and what I'm sure was lots of other fun stuff we did whilst we were not sailing. It does all kind of blur into one however, a kind of pleasant gauzey, background haze against which the two days out on the water sit like paintings. 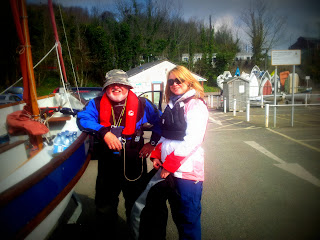 The Caffa Mill slip in Fowey proved the most accessible launch, being twenty minutes from our front door, with easy, easy access by road, and very quiet this early in the year with loads of parking for car and trailer. 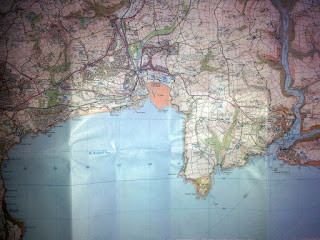 Our first day out was on Monday the 2nd, a couple of days into our holiday. It was bright and sunny, with a gentle southeasterly blowing, so we motored out of the harbour, set the sails and aimed for Charlestown. In the conditions, it took about two and a half hours to get there, a good part of that with me silently cursing the fact that I'd forgotten to remind Dad to bring the boom, as once around Gribbin Head it was a meditative run, with the jib goosewinged and the main ineligantly poled out with the boat-hook. 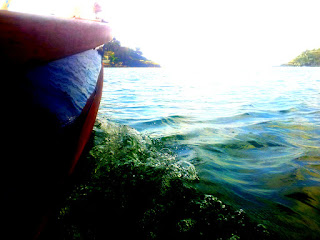 The more we take her to sea and the more we tramp around the turbulent waters of the Severn Estuary with her the fonder I'm growing of the boat, but whichever way you look at it, Drascombe Luggers are horrid dead down wind unless you break with catechism and fit a boom. 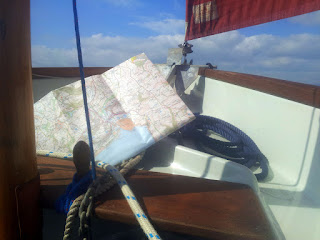 We crossed St Austell Bay under sail in a genteel drift with H on the helm, yours truely sunning himself on the foredeck and Dad muttering "Are we there yet?" and "She motor-sails really well" and "There's no wind, I should start the outboard now". 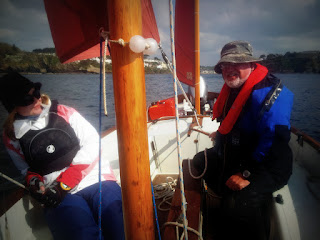 On making Charlestown just before high tide, we motored into the harbour and put in alongside some steps, but the wall was unforgiving in even the gentle swell we had, so we retreated back outside and anchored off the beach just beyond the surf. By easing the boat in astern on the anchor warp we were able to briefly plant the transom on the sandy lee shore so that Dad could step aground and go hunt down some pasties for his two crew mates. 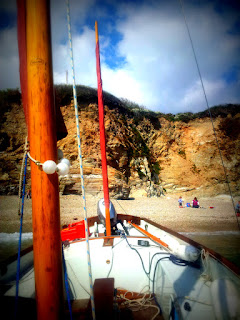 There was nowhere in Charlestown that did take-away food this early in the year, but the pub seemed so amused that we'd arrived by sea that they made an exception and hunted around for a Tesco's carrier bag so Dad could carry lunch down to us. We subsequently feasted on Cornish pasties and tuna and sweetcorn sandwiches, just beyond the surf line off Charlestown beach, in lunchtime sunshine that felt sublimely tropical. 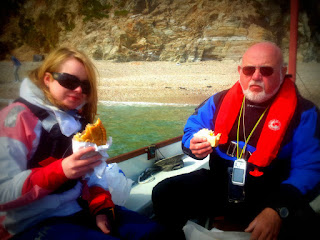 Friday 6th was the next day we were able to secure our release release to go play on the water again, and so we decided that we wanted to land at Polkeris.This time we had broken sunshine with a slightly stiffer, northerly wind and more of a swell. Once around Gribbin Head, staying clear of the off-lying Cannis Rock, now much more obvious with the tide well on the ebb, laying Polkeris became a series of long beats to windward. 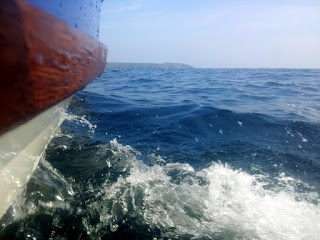 On reaching Polkeris twenty minutes before bottom of tide, we furled the sails to motor in, but concerned about just how shallow the exceptionally clear water was getting, killed the outboard and lifted the rudder quite a fair way out, poling the rest of the way in on the oars. In hindsight it might have been more elegant to have actually rowed in, and we were certainly premature in stowing the outboard, but it worked and with the wind in the north, in the lee of the high ground behind Polkeris the beach was exceptionally sheltered and the sea mirror smooth with no more than a gentle lapping on the shore. 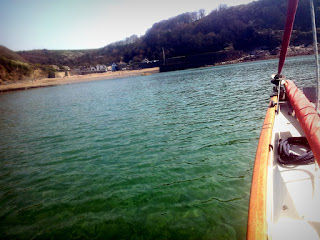 I walked the anchor some way up the beach, then returned to the boat to offer Hs a piggyback to the sand. Brave of her to accept, I thought, especially as the last time I did this for somebody I fell backwards with the inevitable consequences, but I managing not to drop her, and we all headed up to the pub for a lunch time drink and a bag of crisps on the patio from where we could watch and admire Ondine bobbing up and down in the gentle surf of the shoreline. 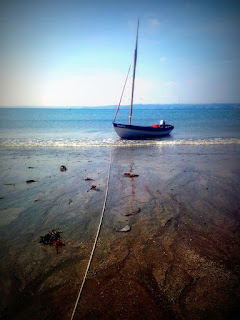 With H once more at the helm, the sail back was an enjoyably broad reach with just enough of a sea to occasionally throw a bit of spray over the foredeck, and then, with me taking over, a beat back into the mouth of the Fowey to land once again at Caffa Mill; a somewhat busier place with Good Friday traffic than we'd left it that morning, but entirely amiable. 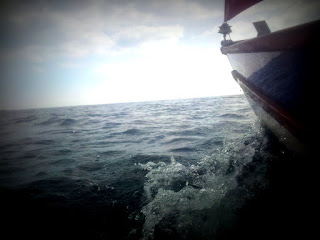 I love Fowey, especially out of season, and can't wait to go back.

On previous visits with the Lugger we've been confined to the harbour and river above by the weather, so before this my only exposure to the sea beyond the harbour mouth was a race around the cans in a British Moth (chasing a procession of Fowey Rivers and their gorgeously coloured sails) and, a year later, a bash out to the Cannis Rock cardinal and back for the fun of it in the same boat with a couple of other moths for company. 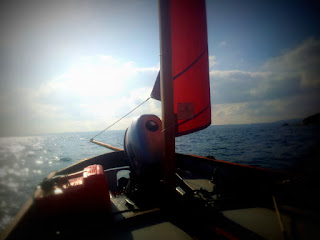 The moth isn't exactly a sea going boat, so the intention of actually going somewhere in the Lugger gives an entirely different perspective. 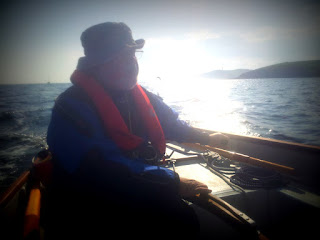 Really can't wait to go back, and plans are being hatched to do so. Seriously considering a weekend trip later in the year with the idea of launching in Fowey and sailing across the bay to overnight in Mevagissy before returning to recover back in Fowey. 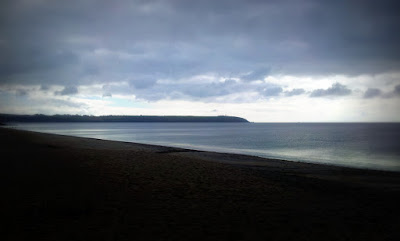