Funny old beast, our Enterprise "Penny". After Dad sold the Wanderer and traded up to the Drascombe I really missed the ready access to a relatively nimble double-hander (relative to a Drascombe Lugger that is) if only for want of a 'social' boat to sail with any friends and the
occasional guests I might bring to the Club. 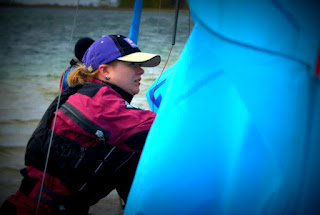 So when H suggested they had the same problem and so we went halves on an old Enterprise it seemed like the perfect solution. Neither of us planned to race her much, let alone travel away with her.

We only sailed the one race for the fun of it, just for a taste. Seemed the perfect way of trying the boat out to see how well she floated. Didn't actually place very well, but discovered that we had a blast sailing together. And that's pretty much when the addiction took hold. 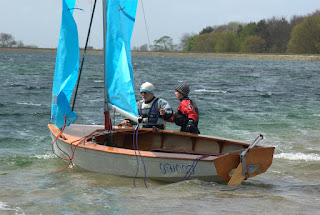 My poor old single-handed Europe has languished under cover ever since as we've compulsively raced the Enterprise at every opportunity and every weekend we could, to the point that I'm seriously considering selling the Europe, previously my pride and joy. And last Sunday even saw us travel away to Bristol Corinthian Yacht Club on Axbridge Reservoir for an Open event, the first of a campaign of about half a dozen such trips we have planned for this season. 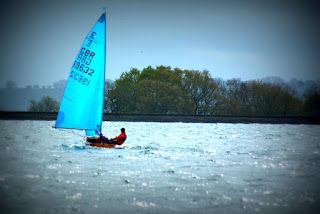 We didn't fare too well. 9th place out of about 11 boats, and no worse mainly because the deteriorating conditions saw retirements in the second and third races, else we'd likely have ended last. We only actually beat one boat on the water, finishing the first race in 10th, and that was by the skin of our teeth in the first race, catching them on the last mark rounding and just scraping ahead over the line with mere seconds to spare.

But beat them we did and a win is a win.

The second race was absolute carnage. The conditions had deteriorated with heavy rain and a gusting 35kt wind kicking up a breaking swell on the mile wide Axbridge reservoir. We capsized twice before the start, the second time in the critical thirty seconds before the final starting gun, so that set the scene with us late to the line and firmly at the back of the back of the fleet with little to no chance of catching up. 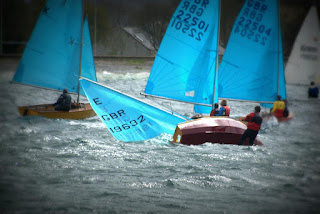 The beats were brutal, and with all but two exceptions, saw all of our many, many capsizes as we were frequently overpowered and flattened. On the second lap, one of the boats ahead capsized at the windward mark, giving us the briefest of chances to catch up and restore a little of our battered dignity. But in vain, as a clumsy attempt to bear away between them and the mark saw us bowled over in similar style and despite my making the centreboard and leaning back for all I was worth,
the wind pushed us into a total inversion. 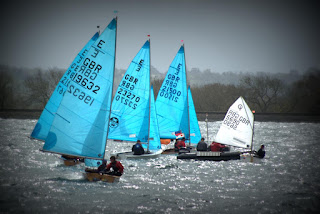 As she rolled over, H popped out from underneath the upturning hull with bare seconds and mere inches to spare, face bedraggled, eyes wide and breath spluttering as she valiently fought to master the panic that must have come with the experience of her first inversion. I managed to stop the centreboard from dropping into its case by scrabbling at it with my fingernails. With the board up for leverage and me on top of the upturned hull, we slowly pulled her back up, literally swam into the swamped cockpit, untangled the sheets, released the transom flaps and kicked the bailers down, bearing away on to the previously planned run and back into the race. 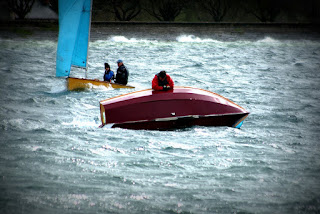 Although I'm not certain, I think the other Enterprise retired after recovering from her own capsize. I think that's what secured our 9th place finish overall. 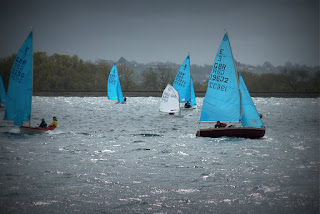 If the beats were brutal however, the reaches were to die for, with Penny screaming along on the plane, the spray so thick in my face that I could barely see the foredeck let alone the mark we were aiming for. 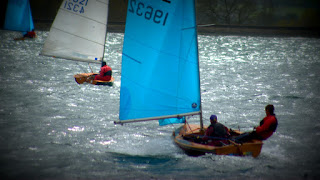 We endured; by the third lap I'd lost count of how many times we'd been knocked down and bowled over, but each time we recovered and pressed on, and just managed to avoid getting lapped by leading boat in the fleet. 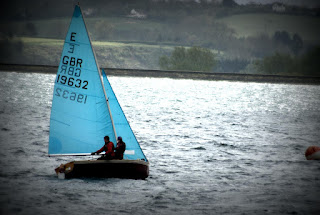 The finishing line came as quite the relief, four retirements from the fleet leaving us in 7th place despite being last over the line. However, exhausted and reaching the end of our physical and emotional limits we retired from the third race prior to the start. 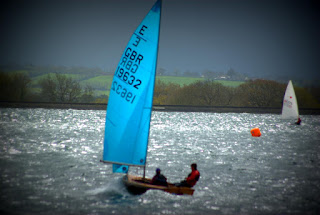 So we were beaten in the end, by both the boat, the wind, the water and most of the rest of the fleet. But it was a fantastic day out and a terrific experience to race Penny against such a competative fleet on a water so much larger and more exposed than our own. I think we both learnt loads, and whilst the experience may have gotten the better of us this time, we'll definitely be back for more.

The next Open Meeting is in just over a week's time, but this time on home territory at Frampton, so we'll have to see how we do there. Can't wait.
Posted by tatali0n