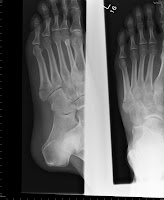 Have also solved the transport problem. Found an automatic. Better still, it's got a tow hook fitted. It'll do until the foot's better, at which point I'll sell it on and recoupe what I can of the costs. Will involve some loss, but worth it for the restoration of independence I think.
Posted by tatali0n